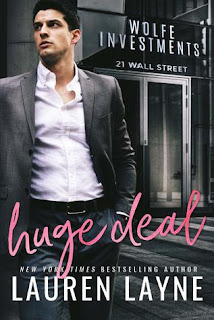 DESCRIPTION:
Even for a top-gun banker, temptation this hot is quite a gamble, in a sexy Wall Street romp from New York Times bestselling author Lauren Layne.

An alpha among the wolves of Wall Street, Kennedy Dawson rose to the top of the pack by striking the right contracts at the right times. But there’s one deal that’s been giving him a run for his money—a pact to never again let his assistant, Kate, get under his skin. She may be smart, gorgeous, and sharp as a whip, but she’s definitely off-limits.

Kate Henley isn’t a banker, but she knows a thing or two about risk management—specifically, about managing her attraction to her smolderingly sexy boss. She already fell once, and Kennedy showed no sign of paying a return on her investment. So when Kennedy’s brother starts pursuing her, Kate figures she has the best of both worlds. Jack is charming, rich, very attentive, and the spitting image of his older brother.

It’s also making Kennedy think twice. But to win Kate’s heart, he’ll have to broker the deal of a lifetime…and prove he’s worth the risk.

Oh how I have looked forward to this book! In this small firm of three Wall Street money makers, Kennedy Dawson finally gets his chance at love. His best friends and partners, Matt Cannon and Ian Bradley, have found the women of their dreams and are ridiculously in love. In this story, Kennedy isn't necessarily looking for his ideal woman. If he is, it certainly wouldn't be Kate Henley, the assistant to all three partners. When they began working together, the three of them made a pact that rendered Kate off-limits.

All the while, Kate has spent years all but worshiping Kennedy from afar. She does her best to hide it. She gets just that opportunity when Kennedy's brother, Jack, blows into town and immediately develops a liking for her. She actually likes Jack. He may not be as exciting as Kennedy, but there are certainly things about him that he Kate likes.

Will Kennedy wake up to his desires? And will Kate realize what brother she she really wants and go after him. Oh how fun it was for friends Sabrina and Lara, as well as Matt and Ian, trying to convince the pair of what was right before their very eyes.

I thoroughly enjoyed the first two books in this series, Hot Asset and Hard Sell, and I definitely think that this book, Huge Deal, was the best of all. Every moment of the book was delightful, especially when the moment of truth was revealed, as well as the other characters that played a part in this story. I look forward to much more from this talented author as she definitely makes the pages sing.

Many thanks to Montlake Romance and to NetGalley for this ARC to review in exchange for my honest opinion.