Review - The View from Alameda Island 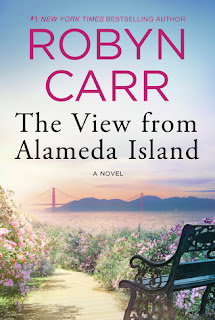 DESCRIPTION:
#1 New York Times bestselling author Robyn Carr delivers a poignant and powerful story about how one woman’s best intentions lead to the worst of situations and how the power of love helps her to heal and ultimately triumph.

From the outside looking in, Lauren Delaney has a life to envy—a successful career, a solid marriage to a prominent surgeon and two beautiful daughters who are off to good colleges. But on her twenty-fourth wedding anniversary Lauren makes a decision that will change everything.

Lauren won’t pretend things are perfect anymore. She defies the controlling husband who has privately mistreated her throughout their marriage and files for divorce. And as she starts her new life, she meets a kindred spirit—a man who is also struggling with the decision to end his unhappy marriage.

But Lauren’s husband wants his “perfect” life back and his actions are shocking. Facing an uncertain future, Lauren discovers an inner strength she didn’t know she had as she fights for the love and happiness she deserves.

Lauren Delaney makes a monumental decision. It is her twenty-fourth wedding anniversary, and instead of heading to a restaurant or some other celebratory destination, she heads to a divorce attorney. Lauren has decided to divorce her husband Brad. Her marriage was never ideal. Far from it. Brad was verbally and emotionally abusive, yet she stayed with him, Lauren had wanted to leave Brad for years. However, they have two daughters, Lacey and Cassie, and Brad always made her worried about custody.

Lauren finds a new apartment, even meets a new neighbor, Beau. However, one day Brad shows up because he wants his ideal life back. Lauren was his everything. Brad didn't even know where the dry cleaners is located, for example! Well, when he gets to Lauren's apartment, the actions he take are totally shocking. Poor Lauren! Well, that's what I thought. Despite what happened that day, Lauren showed incredible strength and battled through experiences worse than she ever experienced during her marriage.

The View from Alameda Island was often a tough read. I was with Lauren every step of the way as she struggled through the changes her life took. I cried more than once, especially when dealing with one of her daughters. The girls had opposite reactions when they learned of Lauren's appeal for divorce. That part of the story was very difficult to read. With the changing circumstances that hit Lauren, her one daughter's reaction was even more frustrating and painful.

Meanwhile, Lauren's new friend, Beau, is also going through a divorce, and makes no secret that he is very drawn to Lauren. Even more so, he is very protective of her. However, Lauren has to guard her heart, lest she end up in another very bad situation. In addition to Lacey, Cassie and Beau, readers got the pleasure of the character, Tim, a priest and Beau's lifelong friend. Tim's counsel and experiences were an excellent addition to a very well-written and engaging story.

I was absorbed in this book from start to finish. Lauren went through so much, yet managed to come out on top. It was so beautifully done. I am sure that many, many women will be able to relate to this story on more than one level. Kudos to Robyn Carr for writing an incredibly compelling read. This is definitely one of my favorite reads this year thus far. 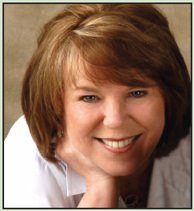 Robyn Carr is a RITA® Award-winning, eleven-time #1 New York Times bestselling author of almost sixty novels, including the critically acclaimed Virgin River series. The fourth novel, THE BEST OF US, in her fan-favorite Sullivan's Crossing Series was released in Jan. 2019. Robyn's new women's fiction novel THE VIEW FROM ALAMEDA ISLAND will be release in April 2019. Robyn is a recipient of the Romance Writers of America Nora Roberts Lifetime Achievement Award 2016, and in 2017, VIRGIN RIVER was named one of the HarperCollins 200 Iconic Books of the past 200 years. Robyn currently resides in Las Vegas, Nevada.

This is my Review of the Month for the review collection on LovelyAudiobooks.info
Posted by Robin Loves Reading at 5/18/2019 05:00:00 AM