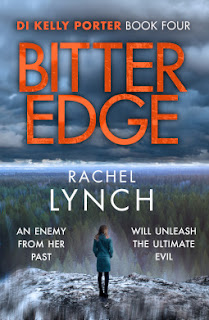 DESCRIPTION:
DI Kelly Porter is back, but so is an old foe and this time he won’t back down... When a teenage girl flings herself off a cliff in pursuit of a gruesome death, DI Kelly Porter is left asking why. Ruled a suicide, there’s no official reason for Kelly to chase answers, but as several of her team’s cases converge on the girl’s school, a new, darker story emerges. One which will bring Kelly face-to-face with an old foe determined to take back what is rightfully his – no matter the cost.

Mired in her pursuit of justice for the growing list of victims, Kelly finds security in Johnny, her family and the father she has only just discovered. But just as she draws close to unearthing the dark truth at the heart of her investigation, a single moment on a cold winter’s night shatters the notion that anything in Kelly’s world can ever truly be safe.

DI Kelly Porter is on the case at a tragic scene. A young girl has thrown herself off of a cliff. Thing is, it was ruled a suicide. But Kelly thinks it is more. So, she and her team head to the school to begin interviewing the staff and students.

Kelly truly has her hands full. If the case, the investigation and her own family life isn't enough, she must now contend with someone from her past. Sadly, he wants something she is not going to give, and that is something he deems his right. Kelly's relationship with her boyfriend Johnny, who works for mountain rescue, is going strong, even with the fact that he has a teen daughter in his care. Kelly also has the opportunity to get to know her biological father, something she never thought would be possible.

Because this story by Rachel Lynch is told in multiple points of view, the solving of the case takes a bit of time to kick in. Instead, the story is mixed with the family drama. This worked for me because this is the fourth book in the DI Kelly Porter series that I have read and I feel invested in Kelly, not only as a police detective, but as a woman.

As far as the investigation is concerned, there are indeed enough twists and turns to keep the most discerning reader invested. Furthermore, the whole story behind the teen death to begin with is very intense. It touches on some very deep issues, and even brings Johnny and his teen daughter into serious consideration. When things like drugs, alcohol and bullying are part of any story, it would be impossible not to pay attention. Furthermore, there is the tragic instance as to how the use of the internet can be instrumental when it comes to harming a person's reputation, enough to drive ones to the brink of death - and beyond.

Kudos to Rachel Lynch for writing such an effective story. I had the opportunity to read this story because I had the first, second, third and fifth books in the DI Kelly Porter series. Because I read the first three, I felt impelled to purchase this copy from Amazon before reading the fifth title, Bold Lies. I am really glad that I followed through because this story, Bitter Edge, was an excellent read.