Review - Pray for the Girl 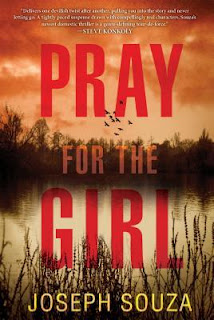 Joseph Souza, acclaimed author of The Neighbor, brings readers into the dark heart of a small town in this riveting, relentlessly twisting new novel . . .

Lucy Abbott never pictured herself coming back to Fawn Grove, Maine. Yet after serving time in Afghanistan, then years spent as a sous chef in New York, she's realized her only hope of moving on from the past involves facing it again. But Fawn Grove, like Lucy herself, has changed.

Lucy's sister, Wendy, is eager to help her adapt, almost stifling her with concern. At the local diner, Lucy is an exotic curiosity--much like the refugees who've arrived in recent years. When a fifteen-year-old Muslim girl is found murdered along the banks of the river, difficult memories of Lucy's time overseas come flooding back and she feels an automatic connection. At first glance, the tragedy looks like an honor killing. But the more Lucy learns about her old hometown, the less certain that seems.

There is menace and hostility here, clothed in neighborly smiles and a veneer of comfort. And when another teen is found dead in a cornfield, his throat slit, Lucy--who knows something about hiding secrets--must confront a truth more brutal than she could have imagined, in the last place she expected it . . .

Lucy Abbott has returned home to Fawn Grove after being away for over fifteen years. First she served in Afghanistan, then she was a very successful sous chef in New York. When she hears of the murder if a fifteen-year-old Muslim girl, she is driven by memories and even voices to go back to Fawn Grove to get to the bottom of things.

Lucy does not have it easy, but her cousin gladly provides her a home in order to help her to adjust. This is a blessing, because things are more than awful. Not only is Lucy dealing with PTSD and other traumas due to the war, there are secrets and hatred in the town. Lucy is very pained by the racial inequality that is so prevalent.

This was a very sensitive story. This passage provides insight about the protagonist. “Was broken in more ways than one, What person in their right mind would want to be with a woman like me? A tortured mind to go along with a tortured body. Two prosthetics that hid my sorry past, although they were the least of my secrets. Then so close to a dishonorable discharge before the incident that cost me my legs. I spent two brutal years recovering at Walter Reed. Who in their right mind would want someone like me sleeping next to them at night?”

Lucy begins asking questions and befriends Dalton, the detective handling the case. Although she has very good reasons for keeping him at arm’s length, she is very drawn to him. Before long, another teen is found murdered. Eventually things get very dangerous for Lucy and she makes a very difficult decision.

What an effective read! I was completely drawn in by Lucy. In no way, however, was I expecting the massive twist that occurred during this story. There were some doubts about her as I read, especially as this story was delivered in first person. Despite my shock, I kept on reading with eager anticipation for the identification of the murderer of the girl, but also for Lucy to find peace in her life.

Pray for the Girl is a very well-rounded book. I have never read anything by Joseph Souza before, but I enjoyed this book so much that I am eager to place his backlist in my TBR. If he writes other stories that are equally as twisted as this book, then consider me a fan. 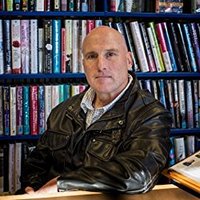 Joseph Souza worked on the South Boston docks during Whitey Bulger’s criminal reign. He has a degree from Northeastern University and once worked in the Organized Crime division of the DEA. His award winning short fiction and essays have published in various literary journals throughout the country. In 2004 he was awarded the Andre Dubus Award in short fiction from the University of Southern Maine for his short story “Loss Prevention.” His most recent short story, “The Devil’s Dumping Ground” was published in Quarry; Crime Stories by New England Writers. In 2010 Joseph Souza won Honorable Mention for the Al Blanchard Award for his short crime story”The Stone Walls of Lebanon”. Joseph lives in Portland, Maine with his wife and two children.