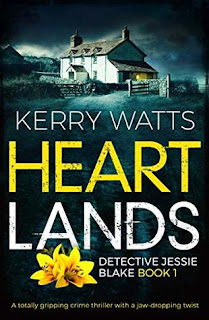 DESCRIPTION:
Call it mother’s intuition, but I knew she was dead the moment she was late home. As I listened to her phone ring and ring, that’s when I knew for sure. My little girl was gone.

Twenty years ago, Sophie Nicoll never came home from school. Days later her body was found in a shallow grave on a remote farm a few miles from her hometown. Two boys from her school were found guilty. The press called the boys evil. Sophie’s family wanted them dead. The judge promised they’d never walk free.

Two decades later and schoolgirl Shannon Ross has vanished from a small town in the Scottish Highlands.

It’s Detective Jessie Blake’s first big case since she joined Perthshire Police. Having recently arrived from London, Jessie lives in fear of people finding out about her past and her reasons for moving north.

When Shannon’s body is found in the river on the outskirts of Inverlochty, Jessie discovers she’s not the only one with something to hide. As the small community begins to crack under pressure, people begin to point fingers. And soon, the big secrets hidden within the small town are revealed – with devastating consequences.

This shocking crime thriller set in the dramatic Scottish Highlands will have you reading well into the night. If you like LJ Ross, Cara Hunter or Robert Bryndza, you will absolutely love this.

In this first book in a new series by Kerry Watts, Detective Jessie Blake takes on her first big case. She is called in when a teen named Shannon Ross never arrived home after school. Jessie has a vigorous task ahead of her, and all the while, she is hiding something dreadful from her past. Never could Jesse have imagined that this very case could possibly expose her secrets.

As it turns out, secrets is what this is all about. What Jessie begins to expose in the small town starts off as small anomalies and eventually explodes. As things progress, layer upon layer of details and connections are revealed. Jessie does her best to put all of the pieces together, all the while hoping that another teen does not lose their life.

This story is delivered in two timelines, thus offering varying points of view. Heartlands was intriguing from the very start. There were a lot of twists and turns and the conclusion was utterly shocking. I look forward to continuing this series.

Kerry Watts was born and grew up in a small town in the East of Scotland. It took twenty years for her to pluck up the courage to finally share her scribbles with the paying public. All of her previous books are published by Creativia and Crazy Ink. She has recently signed a three book deal with the fabulous Bookouture to write a brand new crime series set in stunning Perthshire. She has been blown away by the wonderful, warm welcome she has received there.  She is always writing and carries a little notebook and pen with her wherever she goes because at her age ideas need to be captured before they disappear.

Kerry specialises in crime fiction because she enjoys pushing the boundaries of what it is to be human. The nature versus nurture debate fascinates her. She loves to put her characters in impossible situations just to see what happens. Her experience as a psychiatric nurse heavily influences her writing.

Authors who inspire her are anyone capable of creating a character who lives inside her head long after she has closed the book. Her favourite fictional character is Dexter Morgan, created by Jeff Lindsay.

When she's not writing she loves to spend time following her other passions - dogs, particularly rescue mutts and horse racing. The sight of a thoroughbred race horse at full stretch has been known to move her to tears, not just lump in the throat stuff but full on blubbing. And for that she is unashamed. One day she's going to buy a race horse and call him Dexter King.