Review - Died in the Wool 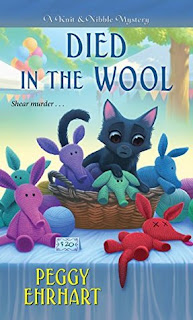 DESCRIPTION:
When a murder shocks picturesque Arborville, New Jersey, Pamela Paterson and her Knit and Nibble knitting club suddenly find themselves at the center of the investigation--as suspects . . .

Pamela is ready to kick back and relax after a busy day selling stuffed aardvarks to benefit Arborville High School's sports program at the annual town festival. But just as she's packing up, she makes a terrible discovery--someone's stashed a body under the Knit and Nibble's table. The victim is Randall Jefferson, a decidedly unpopular history teacher after his recent op-ed criticizing the school's sports program. But the primary suspect has an alibi, and the only clue is a stuffed aardvark found on the victim's chest . . . Now the Knit and Nibblers must unravel the case quickly--before a crafty killer repeats a deadly pattern.

Pamela Paterson can’t seem to catch a break. While at her town's annual festival, proudly selling her stuffed aardvarks, Pamela happens upon a dead body. The body was found under the Knit and Nibble table. Knit and Nibble is a knitting group that Pamela is a part of. What really stinks for Pamela, and the other members, is that they are suspects in the murder.

The victim is the high school’s history teacher, Randall Jefferson. The twist is that Pamela’s knitting group was planning to use its proceeds to assist the school’s sports program, which was something that Mr. Jefferson clearly maligned. So Pamela is determined to investigate things, even though some of her friends highly disapprove.

There is a bit of humor in Died in the Wool, which is the second book in the Knit and Nibble series. As in the first story, the investigation is rather delightful. I enjoyed Pamela’s thought processes, techniques and questions. As previously, knitting techniques and even a recipe or two are offered.

Although part of a series, this book can be read as a standalone. So, pick up this book and read of the antics of Pamela and fellow amateur sleuth Bettina.

The first book in the series is Murder, She Knit, to be followed by Knit One, Die Two. The next in the series are Silent Knit, Deadly Knit, scheduled for release in October, and A Fatal Yarn, with a release date in March, 2020.