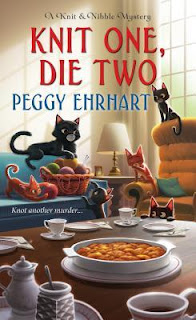 DESCRIPTION:
When Arborville, New Jersey's snooty theater scene is upstaged by a shocking murder, Pamela Paterson and her Knit and Nibble knitting club must act quickly to stop a killer from making an encore performance . . .

Knit and Nibble's numbers are growing! In addition to a litter of adorable kittens, the knitting club just welcomed their newest member, Caralee Lorimer, who's learning to knit for her upcoming role in A Tale of Two Cities. According to the amateur actress, the behind-the-scenes drama at the theater is getting downright catty, and Caralee wants a reckoning for Arborville's pretentious suburbanites. Her claws are out, and just like her character in the play, Caralee is ready to name names. But before she can finish her snitchy stitches, Caralee is killed in a suspicious theater accident. Someone thinks they've staged a perfect murder, but Pamela and her Knit and Nibblers are ready to pounce on the real killer . . . before it's curtains for anyone else!

Pamela Paterson's knitting group is growing, and has just gladly accepted a new member, Caralee Lorimer. As an amateur actress, Caralee has a new role, and knitting is sure to help her prepare. Caralee intimates that there are issues going on in the play, and she is not shy about saying that she will be all too happy to name names.

Now it seems that someone was more than proficient in staging what just might be called a perfect murder. In typical fashion, Pamela, Bettina and friends will stop at nothing to get to the bottom of things.

In this delightful group of knitters, there is one, Roland, who tickled me. He was supposed to be knitting in order to teach himself how to relax. However, on one of his projects he had counted the number of stitches per day, per his goal, in order to present a gift to his wife, by a specific date. A way to relax? Well, I am not so sure. It was passages like this that made this story so much fun. Then, the six adorable kittens at least have to be mentioned in this review.

As always for this series, knitting tips are shared, as well as wonderful recipes. This story, like the others, is full of exceptional characters and I look forward to reading much more.

The first book in this enjoyable series is Murder, She Knit, to be followed by Died in the Wool. The next in the series are Silent Knit, Deadly Knit, scheduled for release in October, and A Fatal Yarn, with a release date in March, 2020.


Many thanks to Kensington and to NetGalley for this ARC to review in exchange for my honest opinion.