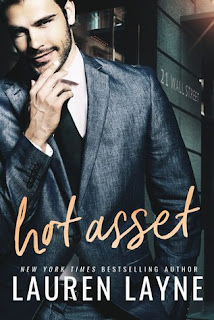 Ian Bradley is the definition of a Wall Street hotshot: seven-figure salary, designer suits, and a corner office. His drive off the floor is just as potent. Every woman who knows him has felt the rush. But now he’s met his match in Lara McKenzie—a woman with the power to bring Ian to his knees.

An ambitious, whip-smart daughter of FBI agents, Lara is a rising star in fighting white-collar crime. Her latest case—the investigation of Ian Bradley for insider trading—could make her career. She knows a scoundrel when she sees one. Ian fits the bill: a cocky, ridiculously handsome bad boy with a slick swagger.


Ian Bradley is a very successful investment banker for Wolfe Investments. His best friends are Matt Cannon and Kennedy Dawson and they are also his coworkers. This job, his seven-figure salary and an office to die for didn’t come easy. He had a very bleak past. He has worked incredibly hard, including growing up in the foster system, to get where he is today. Everything could come toppling down, however. He has been accused of insider trading and is under investigation.

Ian is a self-described manwhore. He never sleeps with the same words woman twice. When Ian sees a woman in the break room at the office, he lays down the charm really thick. From the outset, she challenges him. Lara McKenzie does not bite. Worse yet, Ian discovers she is the very SEC agent hired to investigate him.

Lara is completely shaken by Ian. Simply put. Well, he was just . . . too much. Too tall. Too charming. Too masculine. Wait. He could end up behind bars and it is her job to do just that. She never loses. Lara’s long-term career goals depend on finding Ian guilty. She wants a white-collar job with the FBI. This just may be her ticket. As Lara spends time looking for evidence or proof against Ian, both are fighting a sizzling attraction. Ian’s career is at stake. Lara’s future is at stake.

Hot Asset is written in dual first person points of view, each alternating chapter written in either Ian’s or Lara’s perspective. This is done in an effective, lighthearted manner and is peppered with humor. This is the first book in the 21 Wall Street series. What a great couple to start with!

This sizzling story is fast-paced with a wonderful ending. Quite naturally, we are introduced to a bevy of characters, who no doubt will have roles in successive stories. I am certain that their stories will be just as delicious. Lauren Layne is new to me, but not for long, as my very next read is Hard Sell, book two, available now. Book three, Huge Deal, is slated for February, 2019.