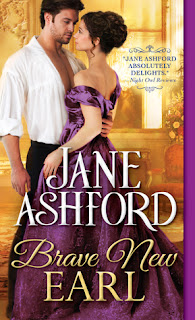 DESCRIPTION:
An Earl mired in melancholy is no match for a determined woman...

Widower Benjamin Romilly, Earl of Furness, has given up hope of finding happiness. His wife died in childbirth five years ago, leaving him with a broken heart and a child who only reminds him of his loss.

Miss Jean Saunders is a cousin by marriage. She doted on Benjamin's late Countess, and can't bear it when she hears rumors that the Earl is too bereaved to care for his young son. She arrives on the scene to evaluate his fitness as a father, and if necessary, to take his son away.

Jean's sudden eruption into the Earl's household simultaneously infuriates and invigorates him. She may be the only person who can breathe life into his neglected home―and his aching heart...

The Earl of Furness, Benjamin Romilly, is a widower with a five-year-old son he barely knows. His wife died in childbirth and Benjamin has been grieving ever since. When Miss Jean Saunders, a cousin by marriage, comes to his home, his life is turned upside down. For starters, her purpose for visiting is to claim his son, as Jean feels that Benjamin is not able to be a good father.

However, despite the fact that Jean all but adored her cousin, Benjamin's deceased wife, she cannot help but to be drawn to Benjamin. By the same token, Benjamin is equally enthralled. Jean turns things upside down. One of the very first things at hand is for her to see that the youngster is properly cared for. If she cannot see that for herself, she is determined to take him away.

Brave New Earl is the first book in a new series by Jane Ashford. This wasn't one of my favorite historical romances but I am very glad to have read it so that I was able to read the next in the series, A Lord Apart. It was a pleasant read with a happy ending.