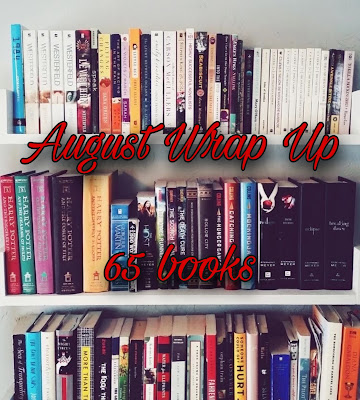 I had a very good month, and although one book less than last month, I did read more pages. Not only did I have an enjoyable month of reading, I caught up on the backlog of book reviews that I needed to write.

This is how I rated all of the books I read in August: 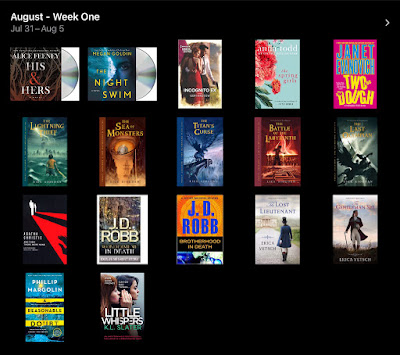 Highlights for the first week of August was the surprising middle grade series by Rick Riordan. Riordan was a featured author in one of the challenges I was doing for the month, so I only had planned on reading The Lightning Thief. However, I enjoyed the book so much that I read the next four books in the series, The Sea of Monsters, The Titan's Curse, The Battle of the Labyrinth and The Last Olympian. I really enjoyed the audiobooks of all of these titles. Now I really want to read his other two series!

I had two other audiobooks that week, The Night Swim by Megan Goldin and His & Hers by Alice Feeney. These were the first two audiobooks for NetGalley's new audiobook program. I had already read The Night Swim, which was an excellent book about an Olympic bound athlete accused of rape. The trial was reported on in podcast fashion. I loved reading it as well as listening to it. Then His & Hers was really good as well. it was a fast-paced book looking at a murder based on two points of view, but then the book threw in the killer's point of view as well.

Another enjoyable audiobook that week was Janet Evanovich's Two for the Dough. I love this series already. Sort of a humorous cozy mystery. I have already read the third book and put book #4 on hold at my library, and have already downloaded #s 5 and 6.

I could go on and on because it was a fabulous reading week! 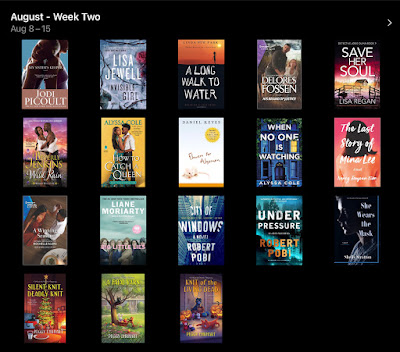 I had another enjoyable week, with more ebooks than audiobooks this time around. The standout books for the second week were the two books by Robert Pobi. He is a former FBI agent who was seriously injured, with several prosthetics. He has a special talent with analyzing a scene from beginning to end, and this makes him invaluable when it comes to solving specific crimes. He is also a strong family man. I can't wait for the next book in the series.

I read three #ownvoices this week. One was Wild Rain by Beverly Jenkins and the other two were by Alyssa Cole, How to Catch a Queen and When No One Were Watching. All three of these books are outstanding. The second book I read by Alyssa Cole was her first thriller, and it was fabulous.

I also read Invisible Girl by Lisa Jewell, and as always, it was another excellent read. It was about a girl who did not like the fact that she was discharged by her therapist. So she begins to stalk him and soon disappears. This was an excellent thriller and will be released October 13.

I needed a book for a challenge that was "good book, terrible movie". So, My Sister's Keeper by Jodi Picoult fit the bill. It was a very moving story about a girl who was brought into this world to serve as a donor for her sister with cancer. Whether it was blood, bone marrow or whatever, she was a human pin cushion, and she grew tired of that seeming to be the only reason her parents had her. 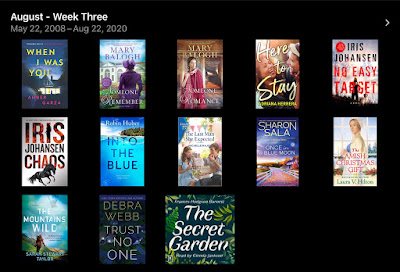 
I read two really good Iris Johansen books, No Easy Target and Chaos. I had the newest book for review, but since it featured one of my favorite characters, Margaret Dawson, I chose to read an older book of hers. In Chaos, she introduces a new character, an FBI agent who pretty much writes her own rule. It is a great book and has a romance that blooms as well.

One treat I had was The Secret Gardenby Francis Hodgson Burnett. This was a NetGalley audiobook download and it was narrated by Glenda Jackson. I loved her performance and it made a book I have always wanted to read that much more enjoyable. 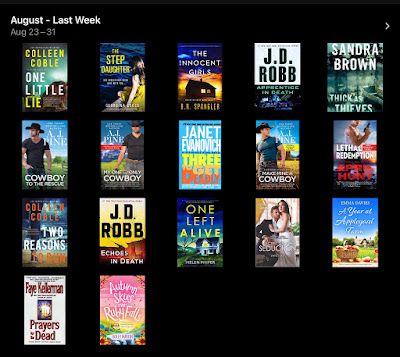 The last week of August was really good for me. I read two Colleen Coble books, One Little Lie and Two Reasons to Run. They center around a woman, a newly appointed police chief, who previously escaped a cult when she was a teen. Years later she learns about lies and secrets that completely changed her life. The first book left on a cliffhanger, but fortunately I had the second book lined up. However, the second book did the same thing, and now I have to wait months for the third book to be released.

I read another Janet Evanovich book. Three to Get Deadly! Now I want to read even more. I also read a few books in a cowboy series by A. J. Pine, Cowboy to the Rescue (which was a novella and a prequel to the series) and My One and Only Cowboy and Make Mine a Cowboy. I really loved these books and cannot wait to continue the series.

I got the latest two books in the J.D. Robb series for review (even the Feb. '21 title), so I was able to get two more books in this last week, Apprentice in Death  and Echoes in Death. I was floored by both of them, and love how Robb (Nora Roberts) always has these different storylines. I only have about six books to read before I get caught up with the series.

Last highlight I will mention is that I got an upcoming Faye Kellerman book for review, and it is part of the Decker/Lazarus series. I listened to the first eight on Audible, and had already purchased the next five. So I decided to listen to Prayers for the Dead, and will be reading a few books each month so by the time the new one is released I will be caught up. This was about a doctor who was killed and how Decker was investigating his murder. Oddly enough to him, his wife Rina was connected to one of the adult children, a priest, so this made Decker's investigation extremely challenging. I cannot wait to read the next books in the series.


Most of the books I read are 4 - 5 Stars because I curate my TBR. When I go to NetGalley or Edelweiss for an ARC, I choose according to what I know I like to read. Also, when I agree to host blog tours, I do the same thing. Also I read a lot of connected books, so that raises the chance that I might like the books that I read. I would much rather DNF a book than to spend hours reading something I am not enjoying just to give it a very low rating.

That makes it hard to tell what my favorite book of the week or even the month would be. I could sit here for hours and talk about all 65 books I read because there was not a bad one in the bunch for the month of August.

Here are my yearly stats so far: 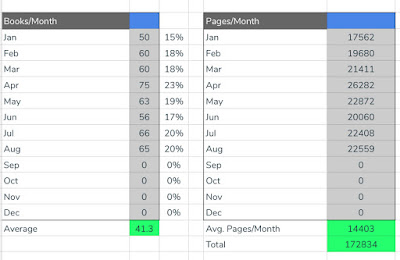 Here are at least some of the books I hope to read in September. I am sure this list will either be augmented or changed at least a dozen times, lol.