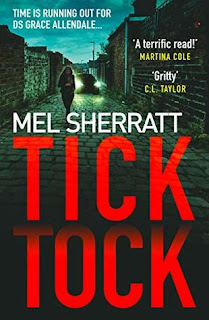 DESCRIPTION:
In the city of Stoke, a teenage girl is murdered in the middle of the day, her lifeless body abandoned in a field behind her school.

DS Grace Allendale and her team are brought in to investigate, but with a bold killer, no leads and nothing to connect the victims, the case seems hopeless. It’s only when a third woman is targeted that a sinister pattern emerges. A dangerous mind is behind these attacks, and Grace realises that the clock is ticking…

Can they catch the killer before another young woman dies?

DS Grace Allendale has the unenviable task of trying to connect two murders. In the town of Stoke, the broken body of a teen girl is found. In two short days, a young mother is kidnapped and found murdered shortly after. With the time factor, there must be a connection and it is up to Grace and her team to discover it.

Before Grace can make any headway, a third woman is an apparent target. Is time running out? Will yet another person lose their life? In Tick Tock, which is aptly named, time is of the essence.

In the first book in the series, Grace developed a friendship with Simon, a local reporter. It did not come easy, due to her past, but in this story, they draw closer together. Their growing relationship grew even more difficult when Simon's own daughter comes into the picture in connection to what is going on. Will Grace keep everyone safe? What of her family that she has recently come to know?

I loved the first book, but, boy, this one was truly a whopper! There were a lot of elements in this story and it was quite fast-paced, with characters that kept my attention and concluded with a stunning ending. Although this book could be read as a standalone, Grace's background, especially regarding her family, might be better understood and appreciated if these books were read in order.

Many thanks to Avon Books UK and to NetGalley for this ARC to review in exchange for my honest opinion. 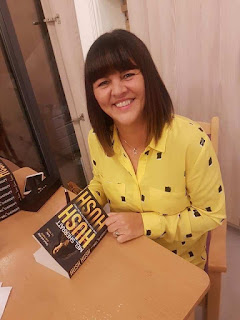 Home is where the hurt is…

Okay, I know I don’t look all dark and moody like most crime writers appear in their images but I do like to be different…

So what do I write? Actually, it’s what don’t I write. I have published fifteen novels so far: police procedurals, psychological thrillers and fiction with a punch – or grit-lit, as I call it. And then there is my pink side – writing as Marcie Steele.

So, all my novels will take you to the heart of the story.

Since 2012, they have become bestsellers, each one climbing into the Kindle UK top 10, with several in the top 3, and many international best sellers too.

I live in Stoke-on-Trent, Staffordshire, with my husband and terrier, Dexter (named after the TV serial killer) and makes liberal use of my hometown as a backdrop for some of my books.

I’m not sure which I am most proud of – being on the list of Stoke-on-Trent’s top 100 most influential people 2018 or after years of rejection going on to sell over one million books.

I regularly appear at festivals, conferences and events across the country – my favourites being London Book Fair and Theakstons Old Peculiar Crime Writing Festival, Harrogate.

So that’s me in a nutshell.