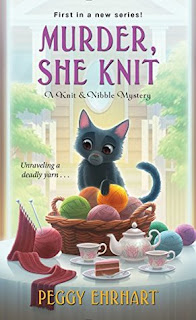 DESCRIPTION:
Since her only daughter left for college, widow Pamela Paterson has kept busy as associate editor of a craft magazine and founder of the Knit and Nibble knitting club in quaint Arborville, New Jersey. Now, she’s trying out a new hobby—solving murders!

Pamela is hosting the next Knit and Nibble meeting and can’t wait to liven up her otherwise empty home with colorful yarn, baking, and a little harmless gossip. She even recruits Amy Morgan, an old friend who recently moved to town, as the group’s newest member. But on the night of the gathering, Amy doesn’t show. Not until Pamela finds the woman dead outside—a knitting needle stabbed through the front of her handmade sweater . . .

Someone committed murder before taking off with Amy’s knitting bag, and Pamela realizes that only she can spot the deadly details hidden in mysterious skeins. But when another murder occurs, naming the culprit—and living to spin the tale—will be more difficult than Pamela ever imagined . . .

Pamela Paterson is busy enough as an editor of a craft magazine. Her daughter is now in college. She is also the founder of a knitting club called Knit and Knibble. This is an extra activity that is spiced up with recipes, but even more so with gossip. Pamela has invited someone new along, Amy Morgan. However, Amy doesn't show up to the next meeting. Shockingly, Pamela discovers Amy's body, killed with a knitting needle.

Just like many of the characters in several of the cozy mysteries that I enjoy reading, Pamela decides to take on the task of investigating Amy's murder, looking for whatever clues she can find. This is a cute little mystery that was a very quick read and gave me the opportunity to start the series, as I had the third book for review.

One thing that I enjoyed while reading this book is the knitting tips. I have never been a knitter, but it always nice to learn new things. A few recipes have been shared as well. I also enjoyed a couple of secondary characters, such as Pamela's neighbor and friend, Bettina, and the adorable but more than a bit anti-social cat, Catrina. Murder She Knit was a pleasant introduction to this series. The next two books, which I have read prior than writing this review, are Died in the Wool and Knit One, Die Two. The next in the series are Silent Knit, Deadly Knit, scheduled for release in October, and A Fatal Yarn, with a release date in March, 2020.