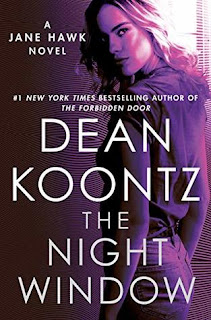 Groundbreaking, wholly involving, eerily prescient and terrifyingly topical, Dean Koontz's Jane Hawk series sets a new standard for contemporary thrillers. Since her sensational debut in The Silent Corner, readers have been riveted by Jane Hawk's resolute quest to take down the influential architects of an accelerating operation to control every level of society via an army of mind-altered citizens. At first, only Jane stood against the "Arcadian" conspirators, but slowly others have emerged to stand with her, even as there are troubling signs that the "adjusted" people are beginning to spin viciously out of control. Now, in the thrilling, climactic showdown that will decide America's future, Jane will require all her resources--and more--as she confronts those at the malevolent, impregnable center of power.

Finally Jane Hawk is not alone. Her incredible fight with the Arcadians is in full throttle but she has someone fighting beside her. For far too long, Jane has been on the run. For her it started when her husband, the love of her life, died. Jane knew that his death was the result of something terrible. She just had to prove it. During the process she became a fugitive, a disgraced ex-FBI agent, and a mother who had to hide her young child in order to protect his life.


Who are the Arcadians? They are a horrid, nefarious group of people who developed a despicable form of mind control, affecting hundreds, if not thousands. These conspirators have reached the deepest levels of society, leaving Jane with no one she can trust. This makes her run faster. Run harder. But she needs to stop them. How will she be able to?

Enter Vikram Rangnekar, someone Jane used to work with. I questioned myself more than once whether or not stating his name in this review is a spoiler. The fact is that the story wouldn't exist without this pivotal character. Enough said.

The Arcadians have developed a method to control minds, turning ordinary or even very successful individuals into robots. Complete mind control. What some of the victims do in this state has a very direct impact as to why Jane is so determined to expose them once and for all. She will not have a future if she doesn't succeed. The country, the world will not have a future.

What a riveting story! The action picks up from the very beginning and never lets up for one second. I rooted for Jane the entire time, not just in this book, but during the entire series. I wanted so much for her to meet her objective, which was clearing her husband's name. But it was her ultimate goal, that of caring for the rest of the world that made her such a remarkable heroine.

I don't know if Dean Koontz will write another book or series like this one, but, if he does, I will be first in line. In the meantime, this series needs to be put in some type of video format. I just know it would work.

The Night Window is the finale of the Jane Hawk series. The books (and their reviews) are listed in order below. There is enough of a back story contained if one should choose to read this as a standalone or any of the series out of order. However, it is a long, involved story and might be better enjoyed as a whole.

When he was a senior in college, Dean Koontz won an Atlantic Monthly fiction competition and has been writing ever since. His books are published in 38 languages and he has sold over 500 million copies to date.

Fourteen of his novels have risen to number one on the New York Times hardcover bestseller list (One Door Away From Heaven, From the Corner of His Eye, Midnight, Cold Fire, The Bad Place, Hideaway, Dragon Tears, Intensity, Sole Survivor, The Husband, Odd Hours, Relentless, What the Night Knows, and 77 Shadow Street), making him one of only a dozen writers ever to have achieved that milestone. Sixteen of his books have risen to the number one position in paperback. His books have also been major bestsellers in countries as diverse as Japan and Sweden.

The New York Times has called his writing “psychologically complex, masterly and satisfying.” The New Orleans Times-Picayune said Koontz is, “at times lyrical without ever being naive or romantic. [He creates] a grotesque world, much like that of Flannery O’Conner or Walker Percy … scary, worthwhile reading.” Rolling Stone has hailed him as “America’s most popular suspense novelist.”

Dean Koontz was born and raised in Pennsylvania. He graduated from Shippensburg State College (now Shippensburg University), and his first job after graduation was with the Appalachian Poverty Program, where he was expected to counsel and tutor underprivileged children on a one-to-one basis. His first day on the job, he discovered that the previous occupier of his position had been beaten up by the very kids he had been trying to help and had landed in the hospital for several weeks. The following year was filled with challenge but also tension, and Koontz was more highly motivated than ever to build a career as a writer. He wrote nights and weekends, which he continued to do after leaving the poverty program and going to work as an English teacher in a suburban school district outside Harrisburg. After a year and a half in that position, his wife, Gerda, made him an offer he couldn’t refuse: “I’ll support you for five years,” she said, “and if you can’t make it as a writer in that time, you’ll never make it.” By the end of those five years, Gerda had quit her job to run the business end of her husband’s writing career.

Dean Koontz lives in Southern California with his wife, Gerda, their golden retriever, Elsa, and the enduring spirit of their goldens, Trixie and Anna.