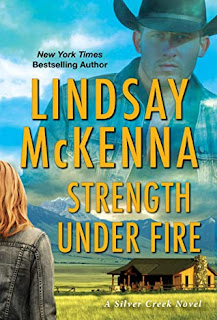 Bereft after the brutal loss of her parents, Dana Scott sinks nearly every dime of her inheritance into buying Wildflower ranch, believing that once she restores the rustic cabin, and farms the untamed acreage, her soul will be whole once more. Hiring wrangler Colin Gallagher to help out just makes sense. But as she works side by side with the handsome loner, she feels an unexpected kinship, and a longing for connection she believed was lost to her forever . . .

Colin is only in Silver Creek long enough to make some money and move on. Restless, spiritually broken, the former Army Ranger has nothing left to give after his harrowing time in battle. But helping Dana make a life for herself has him yearning for more. Until the domestic terrorists that destroyed Dana’s family catch up with her, determined to silence her forever. It’s a threat that has Colin calling on all his considerable training to keep safe the woman who has taken hold of his heart . . .
Link to purchase the book
MY THOUGHTS:
In the most emotional story of the Silver Creek series, Dana Scott and Colin Gallagher are both beset by pain, albeit for very different reasons. Still saddened by the loss of her parents, Dana moved to Silver Creek, Wyoming and bought the Wildflower Ranch. It might have taken just about every last penny she had, but it offers a clean break. A fresh start. Something to replace the pain. At first glance the picturesque town touches Dana's heart. She is ready to get started and plans on restoring the ranch's cabin and bringing the acreage back to life. Advised to hire a wrangler, Dana is referred to Colin Gallagher.
Colin needs a job. He needs money in his pocket. And, he is a very hard worker. ex-military. Also, Colin is suffering from PTSD. All he wants is to do is to make enough money to start over again. What Colin did not plan was to begin to foster feelings for his new employer, Dana.
More about Dana's loss. Her parents were wonderful, but she lost them to domestic terrorists, and the nefarious group doesn't plan on stopping there. No, she is a loose string. Her life is in jeopardy and it doesn't take long for tentacles of danger to begin touching her. This brings out the protective instincts that are ingrained in Colin.
Strength Under Fire was definitely my favorite book of the series. I loved the previous two books, Silver Creek Fire and Courage Under Fire, but this had a different vibe to it, a more emotional, compelling edge. Dana and Colin needed love and hope and I loved watching their transition in that direction, even with danger looming at every turn.
Many thanks to Zebra and to NetGalley for this ARC for review. This is my honest opinion.
ABOUT THE AUTHOR:

I've lived six lives in one and it all shows up in the books I write, one way or another.
I was always a risk taker and broke mustangs at thirteen years old in Oregon. I learn to break them with love, not threat or pain.
At 17 years old, I picked night-crawlers (worms) out in our Oregon orchards from 9pm to midnight, every night. I earned enough money to buy my school clothes and book. I also plunked down $600 to a flight company at the Medford, Oregon airport and asked them to teach me...a girl...to fly. I soloed in 12 hours, which is average. From that time until I left for the US Navy at 18, I had accrued 39 hours of flight time in my Cessna 150 single engine airplane.
I was in the US military and was an AG3 (weather forecaster). There was no airplane club, so I couldn't fly when I was in the Navy. But I could look at the clouds in the sky ;-).
Later, I flew in a B-52 bomber for a day and night mission (18 hours total), a T-38 Talon jet, USAF, where I was riding in a "chase plane" on a test flight in a Dragonfly jet.
I was one of the first AFLA (American Fencing League of America) women fencers to fence with epee and sabre. These weapons were closed to women because they were too 'heavy' for a female to handle. I said baloney and fought the males and won half my bouts. I was part of a surge of women fencers on the East Coast in the 1970's to push for equality in the sport. Together, we changed the sport and changed the mind of the men. Today? In the Olympics? Women now fence in foil, epee and sabre, thanks to what we did as a vanguard showing the world it could be done.
I then became a volunteer firefighter when I was a civilian once more, the first woman in an all - male fire department in West Point, Ohio for three years. I became a local expert not only in firefighting, driving the engine and tanker trunks, but also had training in hazardous material (Reynoldsburg Fire Academy, Columbus, OH).
My books always reflect what I experienced. If you like edgy, gritty, deeply and emotionally intense love stories with sympathetic heroes and heroines
web | twitter