BLOG TOUR - The Woman At the Gates 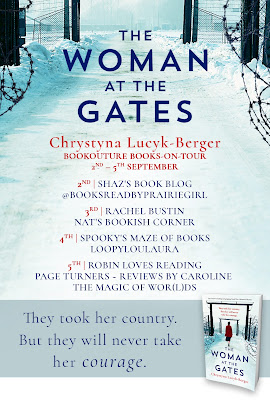 DESCRIPTION:
1944, Germany: Gazing through the barbed wire fence, up to the pale blue sky, Antonia dreams of home: cherry orchards, golden fields, and the man she loves, who she may never see again…
Resistance fighter Antonia is out in the forest behind her family’s beloved farm when the Nazi soldiers arrive. As she sees her sister Lena and her young nephews herded towards the trucks, guns pointed at their heads, she faces a split-second, heart-wrenching decision: to stay hidden, stay free and continue the fight. Or to give herself up and go with her family to protect them—no matter what lies ahead.
As she clutches her nephew’s little hand in hers, her other arm tight around Lena, she knows she has made the right choice. And as the truck rattles towards a brutal labor camp, and they start to wonder what fate has in store for them, Antonia’s only thought is of how to escape.

Because before they were captured, Antonia worked tirelessly to free her country from those who had turned her homeland into a bloody battleground. By her side had been clever, handsome Viktor. The man she was to marry, whose love shone like a light in the darkness of war surrounding them.

Antonia does not know if Viktor has been caught or executed. But she knows she must try to find a way back to him and she cannot wait any longer to be saved. Her precious nephews will die without proper food and they could all be killed at any moment.

The world outside the camp gates is full of danger, but they have to find a way through them first. And that is their only hope, even if it costs Antonia her life. The Nazis have taken everything from her, but they can never take away her courage…

A heartbreaking, inspiring and totally unforgettable story of the unbelievable courage and determination of extraordinary people in the darkest days of war. Fans of Kristin Hannah, Fiona Valpy, and The Tattooist of Auschwitz will be gripped from the very first page until the final, heart-stopping conclusion. 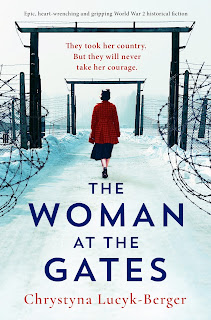 Title:   The Woman at the Gates
Author:  Chrystyna Lucyk-Berger
Publisher:  Bookouture
Genre:   Historical Fiction
Format:  Kindle ARC
No. of Pages:   343
Date of Publication:   September 2, 2021
My Rating:   5 Stars
Reality morphed into brutality as Antonia and her family are forced out of their home in the Ukraine. In this heartbreaking story, Antonia did not go down without a fight, instead she became a resistance fighter. Nonetheless, she just about lost everything. When her sister and nephews had guns pointed at them, Antonia was far enough away that she could have stayed back and continued her fight against the Nazis. Instead, her heart was with her family and she let herself be herded away without knowing her fate.
When captured, she lost Viktor, someone very dear to her. Struggling inside of a concentration camp among countless others, Antonia continued her fight. Her fight was not just for her people, but a means to work her way back to him. What a tragic, often horrifying story. However, the story slowly became one of hope, with courage proving to be the guiding force.
Antonia was a remarkably strong woman to say the least. Her strength shone through time and again, no matter the danger. No matter the challenge. Her love for her family was remarkable, even if it allowed her heart to be broken in the process. This story wrung me out to dry. The fact that it was based on a true story (see Author's note) nearly floored me. The characters that Chrystyna Lucyk-Berger used in the story each had a model and a background that readers just have to know about. So please, read her note at the end of the book. When a talented author can take the devastating experiences of others and create an affecting story that mixes fact and fiction it truly demonstrates amazing talent.
Many thanks to Bookouture and to NetGalley for this ARC for review. This is my honest opinion.
ABOUT THE AUTHOR: 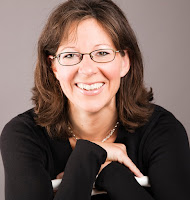 Chrystyna Lucyk-Berger was born in Minnesota in 1969. A first-generation American of Ukrainian immigrants, she grew up in the culture-rich neighborhood of "Nordeast" Minneapolis. Inspired by her second-grade teacher, her writing career began with short stories, then morphed into travel narratives, and eventually novels. She has worked as a journalist and as a managing editor for a magazine publisher before jumping the editor's desk and pursuing her dreams of writing and traveling. In 2000, she moved to western Austria and established her own communications training company. She has won several awards for her short stories and novels and now primarily writes historical fiction.