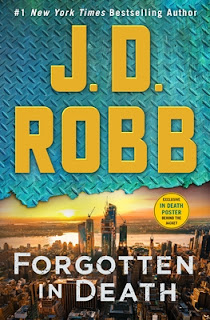 Title:  Forgotten in Death
Author:  J. D. Robb
Series:  In Death #53
Publisher:  St. Martin's Press
Genre:  Mystery/Thrillers
Format:  Kindle ARC
Date of Publication:  September 7, 2021
No. of Pages:  384
My rating:  5 Stars
DESCRIPTION:
In the latest novel in the #1 New York Times bestselling series, homicide detective Eve Dallas sifts through the wreckage of the past to find a killer.
The body was left in a dumpster like so much trash, the victim a woman of no fixed address, known for offering paper flowers in return for spare change—and for keeping the cops informed of any infractions she witnessed on the street. But the notebook where she scribbled her intel on litterers and other such offenders is nowhere to be found.
Then Eve is summoned away to a nearby building site to view more remains—in this case decades old, adorned with gold jewelry and fine clothing—unearthed by recent construction work. She isn’t happy when she realizes that the scene of the crime belongs to her husband, Roarke—not that it should surprise her, since the Irish billionaire owns a good chunk of New York. Now Eve must enter a complex world of real estate development, family history, shady deals, and shocking secrets to find justice for two women whose lives were thrown away…
Link to purchase the book
MY THOUGHTS:
Lieutenant Eve Dallas and billionaire husband Roarke are at it again. Another body has been found - this one in a dumpster - and Eve is the homicide detective on the case. Of course, Roarke is always there by her side - expertise notwithstanding, but a cup of coffee, a hug, anything else his love language has to offer.
The victim was a homeless woman, but so much more. In fact, she not only looked out for other homeless people, she also was a bit of a vigilante. She was known for writing infractions down in a notebook, but when her body was discovered, her notebook was not with her.
As if Eve already doesn't have her hands full with that murder, she is called to another scene, that of a building site where remains decades old have been discovered during a renovation. The building is owned by Roarke and that doesn't bode well for Eve. However, this really doesn't come to a huge surprise to her since Roarke already owns at least half of New York and pretty much lots of other on and off planet property. Yeah, this is a futuristic detective fiction series. Love that.
This series started off with the setting being 2059 and it is now set in 2061, so there are some very cool aspects threaded into the pages of these novels. Factor in excellent plots that are always quite intereting, fast pacing, danger, complex and engaging characteers, strong relationships and the marvelous connection Eve and Roarke share, and you have the recipe for a wonderful book and successful series.
I am already pumped to read the next book in the series, Abandoned in Death, scheduled for release in February 2022. J. D. Robb, which is Nora Roberts pseudonym, is amazingly talented and I cannot wait to see what she next has in store for Eve and Roarke.
Many thanks to St. Martin's Press and to NetGalley for this ARC for review. This is my honest opinion.
ABOUT THE AUTHOR: