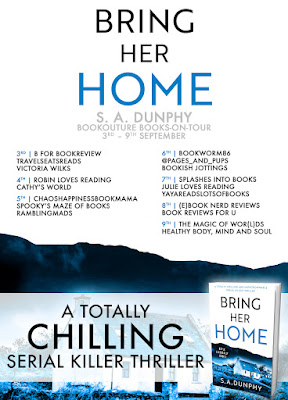 DESCRIPTION:
She had taken only one step towards the hotel when she heard the car door opening, and then something had her by the shoulders in a grip like steel. Penny tried to fight, but it was no good. The last thing she heard as consciousness drifted away was the whisper of a familiar song…

On a cold night in October a pretty, blonde girl named Penny O’Dwyer is snatched from the quiet main street of a small, coastal town in the west of Ireland. No one saw anything, and a desperate search leads nowhere… Until her abductor sends a video declaring Penny only has ten days to live and a deadly countdown begins.

Criminal behaviourist Jessie Boyle hoped never to work a case in Ireland again. But when her career in London is cut short by a brutal tragedy, she returns to her homeland to grieve – only for her oldest friend to call in a long overdue debt. ‘Help us catch this monster and bring Penny home. We need you, Jessie.’

Throwing herself into the investigation, Jessie makes a chilling discovery: Penny wasn’t the first girl to be taken. As her team find more missing women, she becomes convinced that a serial killer has been hiding in plain sight for years. Nothing seems to tie the victims together, until Jessie realises that that each abduction site is linked to the old Irish myths she read as a child.

Time is running out for Penny, and Jessie’s only hope is to understand the killer’s twisted logic. But he is closer than she imagined… and Jessie is next in his sights. Will she risk everything to save an innocent life?

A totally breathtaking and chilling crime thriller that will keep you gripped to the very last page, perfect for fans of Lisa Regan, A.J. Rivers, Tana French and Lisa Gardner. 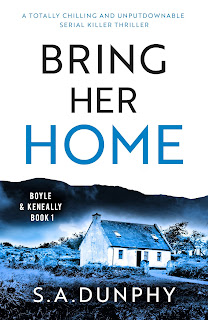 Title:   Bring Her Home
Author:  S. A. Dunphy
Series:  Boyle & Keneally #1
Publisher:  Bookouture
Genre:   Mystery/Thrillers
Format:  Audiobook  and ebook ARC
Narrator:  Shelly Atkinson
No. of Pages:   317
Date of Publication:   September 3, 2021
My Rating:   4 stars
Jessie Boyle is a criminal behaviorist who once had a successful career in London. However, Jessie experienced a horrid tragedy and had planned on leaving policing behind. However, her oldest friend Dawn contacts her and reminds Jessie of a long overdue debt, and soon Jessie realizes that she has two short weeks to work on a case. Jessie simply cannot say no to Dawn.
As mentioned, Jessie is pulled into a time-sensitive case. The victim is Penny O'Dwyer who has been kidnapped. With a prominent father, Penny's case is a demanding one. It has becomes more than evident that her kidnapping is not the first of its type in Ireland. Jessie is not doing this on her own. She is working alongside Seamus Keneally, a decorated detective. There is a third person on this newly created team, and she is Terri Kehoe, who has a unique skillset that will prove valuable in the search for Penny.
This case is not easy for more than one reason for Jessie. Forced to face her previous partner‘s killer at the mental facility where he will spend the rest of his life is necessary in order to try to find information on what happened to Penny. This is a chilling thing for Jessie and she would rather be anywhere but she knows she must find her. How can someone under 24-hour guard have anything to do with the kidnapping? Jessie can see the link but not the how he has at least some knowledge of what happened to Penny. Therefore, Jessie and Seamus work feverishly together to try and find Penny before the clock runs out.
The case is complicated, and somehow involves Celtic mythology and old Irish myths. Slowly, things begin to unravel that lead to other kidnappings and murders of several women, and one thing after another brings them ever closer to the killer. However, how close is too close and how does Jessie play into the killer's plans?
Jessie and Seamus make a wonderful team, despite how strikingly different they are. They face danger with aplomb, and as they do the tension is raised higher and higher. In fact, there was a point in this book that I just all but held my breath. Danger and tension, mixed with a sudden course of action meant that everything could be lost.
As this exciting story was being told, snippets of all of the characters lives were blended in. This was an excellent way for us to meet all the the primary players that we will see in successive books in what promises to be a thrilling series. I was reviewing Bring Her Home as an audiobook and let me tell you, the narrator, Shelly Atkinson. did a superb job! I loved her Irish accent, and she did all of the voices remarkably well. This took an already fabulously written story to new levels and pulled me even deeper into it even more than I already was.
Many thanks to Bookouture and to NetGalley for this ARC for review. This is my honest opinion.
ABOUT THE AUTHOR:

Shane Dunphy (S. A. Dunphy) was born in Brighton in 1973, but grew up in Ireland, where he has lived and worked for most of his life. A child protection worker for fifteen years, he is the bestselling author of seventeen books, including the number one Irish bestseller Wednesday’s Child and the Sunday Times Bestseller The Girl Who Couldn't Smile. His bestselling series of crime novels (written under the name S. A. Dunphy) feature the criminologist David Dunnigan. Stories From the Margins, his new series of true crime books written for Audible, has been critically acclaimed and the second title in the series, The Bad Place, is an Audible True Crime bestseller.