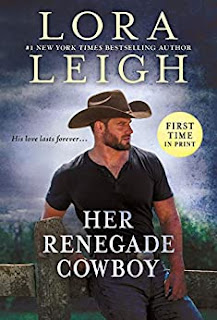 He will risk his life…

The oh-so-proper school teacher, Lily Donovan has learned, the hard way, that men are not to be trusted. Period. Until Levi Roberts, the new cowboy working at her cousin's ranch, tempts her carefully-built resolve and awakens an all-consuming passion she thought lay dormant. But when she discovers his deadly secret, and her own secrets come to light, Lily unwittingly joins the lethal cat and mouse race between Levi and the man he’s been hunting for weeks.

To save her heart…

Former Ranger Levi Roberts has seen his fair share of deadly trouble during his years as a tough-as-nails operative. The ultimate expert in undercover investigations, he’s been tasked to find a man with a dangerous agenda in town. Routine work has been boring…until he runs into Lily, the prickly school teacher who tempts him like no other. Getting under her skin has been deliciously satisfying for his red-hot desire, but when Lily lands in the hands of the very man he’s been investigating, Levi will have to fight with every ounce of his heart and soul to save her—and to heal the heart he broke.
Link to purchase the book
MY THOUGHTS:
She had her chance at Witness Protection. She chose to reject it. Is her life in danger now? Why is Levi Roberts working on the ranch Lily Donovan's cousin Jacob owns? Could Lily's past be about to meet her front and center? Is it too late for Lily or could the man that once nearly killed her get his chance to finish the job now that he has escaped from prison? Levi is an undercover wrangler. He is an ex U. S. Army Ranger, now he is a deputy U. S. Marshal and a part of the fugitive recovery task force.
Both Lily and Levi have secrets. She intends on keeping her past a secret, and Levi intends on keeping his purpose of being in her life a secret. However, they are both drawn to one another, and this is from first glance. More than knowing the danger that Lily is facing, Levi can sense her trauma. Levi must determine whether or not to act on their growing feelings for one another in order to do his job.
While The Renegade Cowboy was the third book in the Moving Violations trilogy it did quite well as a standalone novel. Having not had the opportunity to read the first two books I was able to be fully invested in the story, all while having a very good idea of the previous couples in the first two books.

I did enjoy the suspense in this story once it started to kick in. My only reticence was the overabundance of steamy scenes. As the book began its focus on the danger that faced Lily, it grew stronger.
Many thanks to  and to NetGalley for this ARC for review. This is my honest opinion.

Lora Leigh dreams in bright, vivid images of the characters’ intent on taking over her writing life, and fights a constant battle to put them on the hard drive of her computer before they can disappear as fast as they appeared.
Lora’s family and her writing life coexist, if not in harmony, in relative peace with each other. Surrounded by a menagerie of pets, friends, and a son who keeps her quick wit engaged, Lora finds her life filled with joys, aided by her fans whose hearts remind her daily why she writes.
web | twitter