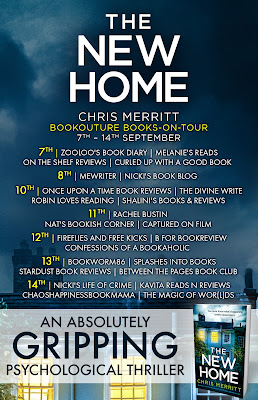 Freya loves her new home on a quiet suburban street. And her beautiful neighbour Emily is everything she’s ever wanted in a best friend. Finally, she has somebody to share her secrets with over a glass of wine. But as Freya watches her new friend setting the table for dinner one evening, she sees something shocking that makes her think that Emily’s life might not be as perfect as it seems. Days later, Emily and her daughter vanish…

When you meet Emily’s husband, you will think you know what he’s hiding.

You will ask yourself whether Emily and Freya really did meet by chance.

You will think you know what happened to Emily and her little girl the night they went missing.

But when you discover the truth, it will shake you to your core and you will lie awake at night wondering if you can ever really trust the people in the house next door…

Fans of Claire McGowan, Shalini Boland and Lisa Jewell will love the gripping tension and unexpected twists of The New Home. Once you start reading, you’ll be hooked! 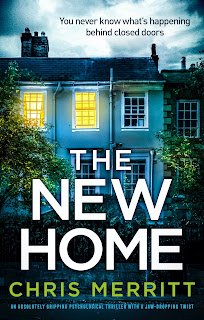 Title:   The New Home
Author:  Chris Merritt
Publisher:  Bookouture
Genre:   Mystery/Thrillers
Format:  Kindle ARC
No. of Pages:   332
Date of Publication:   September 7, 2021
My Rating:   4 Stars
Freya is excited to be moving into her new home with her fiancé Jack. As a cardiologist, Jack's new job moves them into a London suburb. Freya makes documentaries, especially for women in desperate cirumstances. However, she is currently not working on anything. When she meets new neighbors Emily and Michael, she gets a strange vibe from Michael. Another neighbor that raises her hackles is the elderly Cathy.
Despite these concerns, Freya is determined to settle in and for her and Jack to begin renovating their new home, especially as they left their friends behind in London. Perhaps Freya has found a new friend in Emily. However, after a few months Emily and her young daughter Thea disappear. With his prior film experience and working with women, Freya is certain that foul play has occurred with Emily and Thea and that Michael had everything to do with it. Freya relies on her past experiences to solve the mysterious disapperances.
Freya doggedly pursues her ideas, much to Jack's consternation and to the police's annoyance. Not sure she can trust her own instincts and the other neighbor Cathy's odd statements from time to time, she still plows forward. Meanwhile, Freya herself has a past, and this is where this already thrilling story takes a sharp twist.
How much of who Freya is and who Michael and Emily are have to actually do with what is going on? A tangled web to be sure, but what a delight watching it all play out in this thrilling story. Freya's character was intriguing and I found myself drawn into her drama and that of the unnamed narrator, which gave the story a different edge, thus creating a tension-filled read from beginning to end.
Many thanks to Bookouture and to NetGalley for this ARC for review. This is my honest opinion.
ABOUT THE AUTHOR: 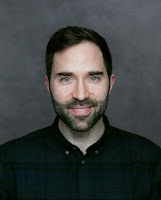 Chris Merritt is a British author whose crime thrillers combine psychology, suspense, and characters you care about.

All his novels are set in London, where he lives. He began writing fiction in 2014, after previous careers as a diplomat, based in Iraq and Jerusalem, and later as a psychologist working with victims and perpetrators of crime. He specialised in treating Post-Traumatic Stress Disorder (PTSD), which sparked his interest in telling stories about how people cope when faced with extreme adversity.

Now, he spends most of his time writing novels and drinking coffee while *thinking* about writing novels. When he's not writing, he loves climbing and playing basketball.