Today we are celebrating the release of the newest romantic suspense title from New York Times Bestselling Author Toni Anderson! COLD AS ICE is a Cold Justice - The Negotiators novel and it is available now. Add the book to Goodreads and follow Toni for exclusive updates.

Check out the purchase links for the book below.

COLD AS ICE by Toni Anderson

Add it to Goodreads

"A terrific, twisting romantic thriller that will keep you guessing until the end! Don't miss this one!" ~#1 NYT Bestselling Author Barbara Freethy.
When Darby O'Roarke wakes up in a strange house with a dead man - with no memory of what happened - she knows who she has to call: FBI Supervisory Special Agent Eban Winters...the man she fell for, and who rejected her, last summer.
A negotiator isn't supposed to get involved with kidnap victims, and Eban has been trying to avoid the temptation that is Darby O'Roarke ever since they met. One frantic phone call has him racing to Alaska to uncover the truth, but he faces stubborn opposition from the local police, and a growing media frenzy.
Getting Darby released from jail and keeping her safe is his first priority. When another woman is brutally slain, evidence emerges that suggests Darby is being framed, and that the culprit is a vicious serial killer who has eluded the FBI for more than a decade...and, now, the killer has Darby in their sights. 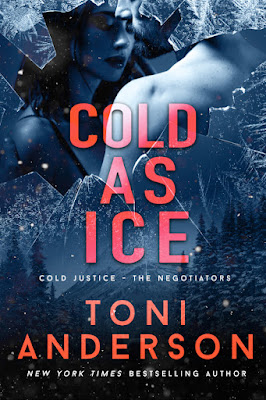 MY THOUGHTS:
Darby O'Roarke opens her eyes. She is on a couch, but whose couch? After a moment or two she realizes where she is at because she had been there for a Christmas party once. As Darby begins to get her bearings, she knows she is at the home of one of her classmates. She calls out to him but receives no response. She heads into the kitchen, washing dishes and making as much noise as possible. Nothing. No response. Not a sound. She creeps to his bedroom and sees his feet. He is lying on his back. As she gets closer to him, she freezes, as she sees him lying there with a knife sticking out of his chest. Dead.
Panicked, Darby grabs her stuff and rushes away. Quite naturally she phones the police. But she makes another call, and that is to Special Supervisory Special Agent Eban Winters. The previous summer Darcy was in Indonesia studying volcanic activity. She was kidnapped and sexually assaulted by terrorists and nearly lost her life. One of her rescuers was Eban and she fell hard for him, but as she was a victim, he shut her down.
As Darby is interviewed by the police, they are fully prepared to charge her for the man's murder. She is convinced she did not kill the man, but is equally confused to the point that she simply cannot remember and thus cannot even begin to prove her innocence. Fortunately for Darcy, one fact quickly becomes clear to prove that she did not commit the murder.
Eban takes this as an opportunity to take her away in order to keep her safe. He is certain that someone was trying to frame Darby for the murder and he intends on protecting her. Another woman is soon murdered, thus cementing Eban's concern for Darby's safety.
A thrilling ride from the very first page. Tension, drama, danger and intrigue come in high doses in this fifth book in the Cold Justice: The Negotiators series. While Eban does his best to keep Darby safe, he has another battle on his hands. That battle is the strong and powerful attraction they both have for one another. Trying to keep things professional prove quite the challenge. Can Eban and Darby stay one step ahead of the killer while accepting the fact that they are destined to be together? To enjoy one another? To carve out a future together?
Many thanks to Toni Anderson for this ARC for review. This is my honest opinion. Originally from a small town in Shropshire, England, Toni studied Marine Biology at University of Liverpool (B.Sc.) and University of St. Andrews (Ph.D.) with the intention she'd never be far from the ocean. Well, that plan backfired and she ended up in the Canadian prairies with her biology professor husband, two kids, a rescue dog, and a laid-back leopard gecko.

Toni started writing while pregnant with her first child and never stopped. Her greatest achievements are mastering the Tokyo subway, climbing Ben Lomond, snorkeling the Great Barrier Reef, and surviving fifteen Winnipeg winters (fingers crossed). She loves to travel for research purposes and was lucky enough to visit the Strategic Information and Operations Center inside FBI Headquarters in Washington, D.C. in 2016. She also got to shove another (police) car off the road during pursuit training at the Writer’s Police Academy. Basically she has way too much fun!

For more information about Toni and her books, please visit her website: https://www.toniandersonauthor.com