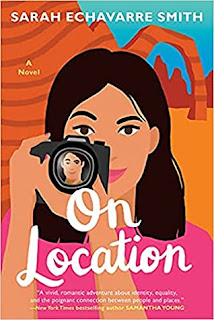 Title:   On Location
Author:  Sarah Smith
Publisher:  Berkley
Genre:   Romance
Format:  Kindle ARC
No. of Pages:   352
Date of Publication:   September 21, 2021
My Rating:   4 Stars
DESCRIPTION:
Nothing like a rocky start between enemy coworkers stuck together on location to prove that love isn't just a ploy for ratings—it's a force of nature.
Alia Dunn has finally gotten her big break. After years of working her way up at TV's top outdoor travel channel, she gets the green light from network executives to bring her dream project to life: produce a series about Utah's national parks. It's a touching tribute to her late apong, who sparked Alia's passion for travel and the outdoors as a kid.
Alia is thrilled--until she meets her newest crew member, Drew Irons. The same Drew she had the most amazing first date with two weeks ago--who then ghosted her. The same Drew who has the most deliciously thick forearms and who loves second-guessing her every move on set in front of the entire crew. It's not long before the tension between them turns hotter than the Utah desert in the dead of summer, and their steamy encounters lead to major feelings.
But when the series host goes rogue one too many times, jeopardizing the entire shoot, Alia realizes that she'll need to organize one hell of a coup to save her show--and she'll need Drew's help to do it. It's the riskiest move she's ever made. If she pulls it off, she'll end up with a hit series and her dream guy . . . but if it all goes wrong, she could lose both.
Link to purchase the book
MY THOUGHTS:
Alia Dunn is not going to let the opportunity of a lifetime pass her up. She gets a fabulous job producing a new series. Falling into bed with crew member Drew Irons is not in her plans. This is especially so since the pair met previously and she was ghosted by him. Drew is the last man that Alia wants to think about. However, he is too gorgeous for his own good. Her attraction to him is palpable and it proves clear that he mirrors her feelings.
But, Alia knows she has something to prove, especially with some difficult crew members and other difficulties that happen on the set. Needing Drew on a professional level soon morphs into needing him on a physical level. How long can they hold out, all while leading the series they are working on to success?
On Location is an enjoyable read with very likable characters. The passion grows with intensity. Meanwhile, drama on the set doesn't seem to let up, thus creating conflicts with Alia and Drew. Sarah Smith is a new author to me, but I really like her style. Reality television has always been popular so to see it fictionalized in a romance book setting was quite a delight.
Many thanks to Berkley and to NetGalley for this ARC for review. This is my honest opinion.
ABOUT THE AUTHOR: 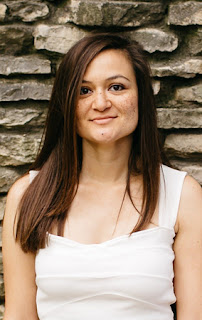 Sarah Smith is a copywriter turned author who wants to make the world a lovelier place, one kissing story at a time. Her love of romance began when she was eight and she discovered her auntie's stash of romance novels. She's been hooked ever since. When she's not writing, you can find her hiking, eating chocolate, and perfecting her lumpia recipe. She lives in Bend, Oregon, with her husband and her adorable cat, Salem.
web | twitter