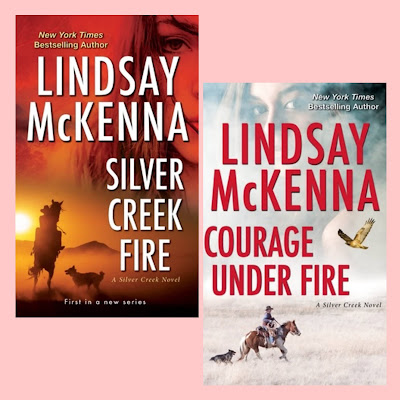 In this blog post I will be reviewing the first two bookSs in the Silver Creek series, Silver Creek Fire and Strength Under Fire. 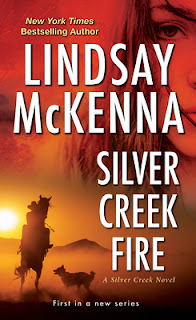 Title:  Silver Creek Fire
Author:  Lindsay McKenna
Publisher:  Zebra
Genre:   Romantic Suspense
Format:  Kindle ARC
No. of Pages:   368
Date of Publication:
My Rating:   4 Stars
DESCRIPTION:
New York Times bestselling author, US Navy Veteran, and genre pioneer Lindsay McKenna combines pulse-pounding suspense with the romance of a contemporary Western for the first installment in her highly emotional, engrossingly swoon-worthy Silver Creek Fire series.
Love's flame burns bright...
Leanna Ryan's hometown in coastal Oregon has been her refuge ever since a traumatic event during her teens. But over time, even the safest harbor can start to feel more like a prison. That's why Lea, a master carpenter and wood sculptor, is moving to Wyoming, a place whose rugged beauty has long captured her imagination. The scenery around Silver Creek is as stunning as she hoped, and her new employer, Logan Anderson, is generous and fair, though his eyes reveal a sadness she recognizes all too well.
Logan immediately knows he can trust Lea with his Wild Goose Ranch remodeling project. Her skill, her dedication--they're as appealing to him as her unaffected beauty. But he has other reasons for unease. There have been disturbing events around the ranch. Then Lea's car is rammed in a hit and run. Logan has already lost so much; now he fears he's jeopardizing not only his property, but Lea too. His dream is to convince Lea to make Silver Creek her home--but first, he'll have to keep her safe...
Link to purchase the book
MY THOUGHTS:
Leanna Ryan is starting over and she takes her exceptional carpentry skills right with her. She gets the perfect job as she starts her new life in Wymong after leaving Oregon. She will be working on remodeling a ranch. She intends on focusing on her work, but is distracted by the ranch's owner, Logan Anderson. What is more is that she affects Logan at well. The two dance around their attraction.
However, a series of "accidents" begin to happen, including almost crashing her car due to a hit-and-run. Is that the only strange circumstance following Lea? Whatever the case, Silver Creek is Logan's home, and he just might want it to be Lea's home as well. This slow burn romance also has plenty of suspense to keep the story interesting.
Many thanks to Zebra and to NetGalley for this ARC for review. This is my honest opinion.
* * * * * 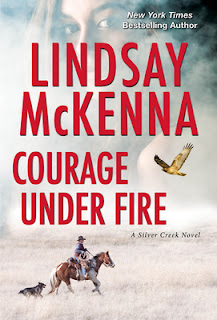 Seeking an escape from her dark past, Carissa Taylor heads to Silver Creek to build a new life. For Cari, landing a job at a historic ranch just outside town is a dream come true, and a chance to put her beekeeping expertise to work. Not only does she feel at home in the ruggedly beautiful landscape, but she’s intensely drawn to rancher Chase Bishop, whose strong, steadfast nature quiets her unease. Maybe here she can finally be more than a hunted woman fleeing a vengeful killer—a man who’s been after her nearly all her life . . .

Chase didn’t dare open his heart again after losing his first love. Until Cari entered his life. Her gentle beauty and nurturing spirit call to him like no other. So when her enraged stepbrother breaks out of prison and comes prowling around Chase’s ranch, the former Marine goes into full protective mode, offering Cari the shelter of his home. But as the murderer’s deadly threats draw ever closer, suddenly Chase is calling on his own killer instincts, knowing he will stop at nothing to keep safe the woman who has captured his soul . . .

“Series fans will be thrilled.”—Publishers Weekly
Link to purchase the book
MY THOUGHTS:
Carissa Taylor has run as far as she can. She had been living in California and had a very successful beekeeping business. But, when she gets a call letting her know that her stepbrother is soon to be released from prison, Cari flees. Broken from a dark past, and the fact that he told her he would kill her, she is left with very little choice. Can she hide in plain site on a big ranch in Silver Creek, Wyoming, and even continue her work as a beekeeper?
Chase Bishop has plans to use part of his ranch's massive acreage to develop honey. He counts himself lucky when he has the opportunity to hire Cari. He had already gotten started in his endeavor, but the beekeeper he had left. As he starts to work with Cari, however, he senses a need to use his former Marine skills to protect her. What is more is that he is quite attracted to her, and it doesn't take long to discover that she feels much the same. Can Cari trust Chase, especially when she is always looking over her shoulder?
Despite her reasons for worry about her safety, Cari proves her resiliency and expertise. Chase is the ideal employer. In addition to that, he has very good intentions on using what he has to help others. Cari and Chase work well together. I did like how the pair slowly recognized their attraction and how that developed. The suspense was handled quite well in this book, especially with the sense of impending danger that Cari held onto. Courage Under Fire was an excellent read and I was glad I have the upcoming third book, Strength Under Fire, as I was able to read it immediately after.
ABOUT THE AUTHOR:

I've lived six lives in one and it all shows up in the books I write, one way or another.
I was always a risk taker and broke mustangs at thirteen years old in Oregon. I learn to break them with love, not threat or pain.
At 17 years old, I picked night-crawlers (worms) out in our Oregon orchards from 9pm to midnight, every night. I earned enough money to buy my school clothes and book. I also plunked down $600 to a flight company at the Medford, Oregon airport and asked them to teach me...a girl...to fly. I soloed in 12 hours, which is average. From that time until I left for the US Navy at 18, I had accrued 39 hours of flight time in my Cessna 150 single engine airplane.
I was in the US military and was an AG3 (weather forecaster). There was no airplane club, so I couldn't fly when I was in the Navy. But I could look at the clouds in the sky ;-).
Later, I flew in a B-52 bomber for a day and night mission (18 hours total), a T-38 Talon jet, USAF, where I was riding in a "chase plane" on a test flight in a Dragonfly jet.
I was one of the first AFLA (American Fencing League of America) women fencers to fence with epee and sabre. These weapons were closed to women because they were too 'heavy' for a female to handle. I said baloney and fought the males and won half my bouts. I was part of a surge of women fencers on the East Coast in the 1970's to push for equality in the sport. Together, we changed the sport and changed the mind of the men. Today? In the Olympics? Women now fence in foil, epee and sabre, thanks to what we did as a vanguard showing the world it could be done.
I then became a volunteer firefighter when I was a civilian once more, the first woman in an all - male fire department in West Point, Ohio for three years. I became a local expert not only in firefighting, driving the engine and tanker trunks, but also had training in hazardous material (Reynoldsburg Fire Academy, Columbus, OH).
My books always reflect what I experienced. If you like edgy, gritty, deeply and emotionally intense love stories with sympathetic heroes and heroines
web | twitter