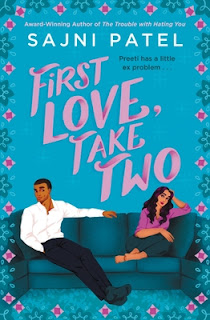 Title:  First Love, Take Two
Series:  The Trouble With Hating You #2
Author:  Sajni Patel
Publisher:  Forever
Genre:   Romance
Format:  Kindle
No. of Pages:   336
Date of Publication:   September 21, 2021
My Rating:   5 Stars
DESCRIPTION:
On the verge of realizing her dream of being a doctor, Preeti Patel should be ecstatic. But between the stress of her residency, trying to find a job, and managing her traditional, no-boundaries family, Preeti's anxiety is through the roof. Relationships and love aren't even an option. Fortunately, Preeti's finally found a new place to stay . . . only to discover that her new roommate is her ex.
Preeti never quite got over Daniel Thompson. Super-hot, plenty of swagger, amazing cook—the guy is practically perfect. And if it weren't for their families, there might have been a happily ever after. But it's hard to keep her sanity and libido in check when the man of her dreams is sleeping mere feet away. Can Preeti and Daniel find a way to stand up and fight for each other one last time . . . before they lose their second chance?
Link to purchase the book
MY THOUGHTS:
Just about from the very first page - in fact - even in the first book of this series, The Trouble With Hating You - Preeti Patel had my heart in a vice. She was wracked with anxiety. This did not make her weak. Not at all. However, her anxiety was almost too much to bear at times. Preeti is about to find love, but not without its challenges. In fact, in this second-chance romance, Daniel Thompson is the man who owns her heart.
Why the challenges? First, we will start with Preeti's current circumstances. She is completing her residency and her roommate has recently married and will soon be returning from her honeymoon. Preeti doesn't have to move, but she feels the couple need their privacy and their space and she doesn't want to be a third wheel. Meanwhile, Preeti hasn't found a permanent position in the hospital yet. Things are looking up, sort of. She just might have a place to live - and a roommate. However, the roommate is none other than Daniel Thompson. Significance? Indeed. The two were once a couple, but her traditional family and roots got in the way.
Thus far in this review, I mentioned Preeti's anxiety, so yes, this book deals with mental illness. But, Daniel's case? He is black, thus the story deals with racism. Of course, Preeti doesn't have issue with Daniel's race; she is infatuated with him. It is her family, her culture, that has gotten in the way. In any case, the two are now roommates. So, the question that begs to be answered is this: Will Preeti and Dianel find common ground and overcome the obstacles that might prevent them from having a second chance in love?
I don't want to include a spoiler, but I did want to mention touch aversion when it comes to the serious nature in this book. When Preeti's parents presented her with marital choices, it was clear to whom she could grow to like and be comfortable around and who she couldn't. Points in favor to Daniel when it came to Preeti coping with that aspect of her emotional issues.
What a wonderful, emotional and endearing story. I am now a Sajni Patel fan and am definitely looking forward to the next book in the series and any future books that she writes.
Many thanks to Forever and to NetGalley for this ARC for review. This is my honest opinion. 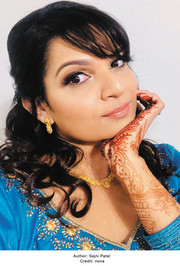 Official Bio:
Award-winning author, Sajni Patel, was born in vibrant India and raised in the heart of Texas. She draws on personal experiences, cultural expectations, and southern flair to create worlds centered around strong Indian women. Once in MMA, she’s now all about puppies, rainbows, and tortured love stories. She divides her time between Hawai’i (where honu is her #1 obsession) and Austin (where she not-so-secretly watches Mathew McConaughey from afar during UT football games.) Queso is her weakness and thanks to her family’s cooking, Indian/Tex-Mex cuisine is a real thing. She’s a die-hard Marvel Comics fan, an ube fanatic, and is always wrapped up in a story.
Unofficial Bio:
Hi! My name is Sajni (rhymes with judge-knee) Patel (pronounced Puh-tell). I moved to the States from India when I was very young and grew up in Texas. Yes, I have a southern accent. Yes, I grew up on Indian, BBQ, Tex-Mex, Mexican, and soul food. Yum! Part of my waking hours are spent advancing space research, playing with animals, and binge-watching Netflix. I write novels featuring Own Voices, romance, and kick-butt girls.
web | twitter | instagram | facebook