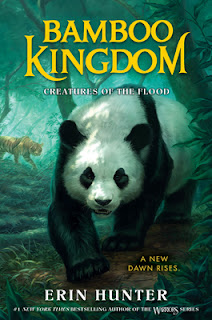 Title:  Bamboo Kingdom
Series:  Creatures of the Flood #1
Author:  Erin Hunter
Publisher:  HarperCollins
Genre:   Middle Grade
Format:  Audiobook ARC
No. of Pages:   256
Date of Publication:   September 28, 2021
My Rating:   4 Stars
DESCRIPTION:
One kingdom. Three worlds. This thrilling new series from bestselling author Erin Hunter follows three panda cubs, separated at birth, who must join together to complete a prophecy and save their home.
The pandas of the Bamboo Kingdom have never forgotten the great flood that ended the peaceful life they’d always known. But for three young creatures born that day, the flood marks not an end, but a beginning—the beginning of their struggles to find a place in very different worlds.
Leaf, raised in the sparse Northern Forest, works tirelessly to help her family find bamboo to eat; Rain, hot-tempered, refuses to accept a suspicious new leader in her Southern Forest community; and Ghost, clumsy and uncoordinated, worries he’ll never fit in with his hunter family in the mountains.
None of them know that the others are out there, but thanks to a mysterious tiger that’s been threatening the Kingdom, they will soon find each other—and fulfill a prophecy that had been made long before they were born.
Erin Hunter fans will flock to this new series packed with the same high-stakes adventures and heartfelt friendships they’ve come to know and love.
Link to purchase the book
MY THOUGHTS:
Leaf, Rain and Ghost are a trio of panda siblings ho were seperated at birth. However, they are forced to find one another again in order to save their home. This engaging story has the pandas remembering the great flood that tore them apart from one another. In this engaging read, each of the pandas were raised in different forests in the Kingdom. Will they be able to work together in order to fulfill a long-ago prophecy?
Erin Hunter is new to me, and it is a rarety for me to read middle grade books. However, this story (and series) caught my attention. Told entirely in the voice of the pandas, readers are pulled into an animal kingdom enduring the trials and changes presented before them to save the Kingdom. I will be sure to get the other books in the trilogy as they are released in order to see if they will meet their goals.
Many thanks to HarperCollins and to NetGalley for this ARC for review. This is my honest opinion.

Erin Hunter is the pseudonym of five people: Kate Cary, Cherith Baldry, Tui T. Sutherland, Gillian Philip, and Inbali Iserles, as well as editor Victoria Holmes. Together, they write the Warriors series as well as the Seekers and Survivors series. Erin Hunter is working on a new series now called Bravelands.
Erin Hunter is inspired by a love of cats and a fascination with the ferocity of the natural world. As well as having a great respect for nature in all its forms, Erin enjoys creating rich mythical explanations for animal behavior, shaped by her interest in astronomy and standing stones.
web