Review - Kissing Under the Mistletoe 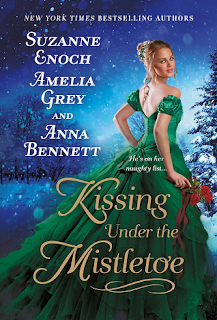 Title:  Kissing Under the Mistletoe
Author:  Suzanne Enoch, Amelia Grey, Anna Bennett
Publisher:  St. Martin's Press
Genre:   Historical Romance
Format:  Kindle ARC
No. of Pages:   344
Date of Publication:   September 28, 2021
My Rating:  4 Stars
DESCRIPTION:
In GREAT SCOT by Suzanne Enoch, Jane Bansil knows she will never have a fairy-tale life. But even at three-and-thirty and well past marriageable age, though, she has to admit that the architect the MacTaggerts have hired could turn even a confirmed spinster’s head.
In CHRISTMAS AT DEWBERRY HOLLOW by Amelia Grey, Isabelle Reed has no plans to ever fall in love. Certainly not with Gate, a man who doesn’t live in Dewberry Hollow. She will fulfill her duty and help him keep his promise to have his ill grandfather back in London in time for Christmas dinner. The last thing Isabelle wants is for Gate to take her heart with him when he goes.
In MY MISTLETOE BEAU by Anna Bennett, Miss Eva Tiding is determined to cheer her widowed father with the perfect Christmas gift. Even if it means breaking into the home of the rakish earl who swindled Papa out of his pocket watch and pretending to date the earl for the Christmas season.
Link to purchase the book
MY THOUGHTS:
GREAT SCOT

Jane Bansil proved instrumental when it came to helping her cousin find her happily ever after. However, this is not something that she ever sees happening for herself. Taking employment as her aunt's companion seems to be the future that she will have. However, when she looks into the eyes of architect Brennan Andrews, she just might have her own chance at love. This lovely story proves that one is never too late for love and that second chances do indeed happen.
CHRISTMAS AT DEWBERRY HOLLOW

Isabelle Reed is a lady, and she enjoys working with her other at an Inn that hosts estimable guests. Isabelle finds contentment in her life, but that all changes when the grandson of a duke is one of the Inn's most recent guests. John Cabot Gagestone, referred to as Gate, finds Isabelle to be lovely and imagines that she just might be the woman for him. Having the example of the tender love of his grandparents leaves Gate wondering if Isabelle could be his. This second novella in this wonderful trilogy was quite a touching read.
MY MISTLETOE BEAU
Eva Tiding and Jack Hardwick are quite aware of a long-standing feud between their fathers. Jack has something that Eva wants, and she goes so far as to break into his home to acquire it. The two strike a deal that they will have a pretend courtship in order to please Jack's grandmother. This enjoyable novella does a fine job showing that pretend feelings could definitely lead to more.
Each novella in this trilogy proved heartwarming as true love shone through for three deserving couples. As these were historical romances, it was a nice layer to effective romances that were truly enjoyable.
Many thanks to St. Martin's Press and to NetGalley for this ARC for review. This is my honest opinion.

Suzanne was born in Southern California sometime in the latter half of the 20th century. In the way that some people are born knowing they want to be astronauts or cellists, Suzanne always knew she wanted to be a writer. Early dreams of becoming a zoologist and writing true stories about her adventures in Africa were crushed, however, after she viewed a television special about the world’s most poisonous snakes; she did NOT want to write about how she’d been bitten and lost a limb to a cobra. Thankfully at the same time the movie “Star Wars” premiered, and she realized that she could make up adventures and write about them, and not be eaten by deadly predators while doing research.
She dabbled in romantic fantasy writing for a year or two after graduating with a degree in English from the University of California, Irvine, until her affection for traditional Regency romances led her to write one for fun. After several encouraging rejections from publishers, she snared the interest of the world’s best and most patient literary agent, who advised her to revise the manuscript. This ultimately led to the publication of her first book, The Black Duke’s Prize, from Avon Books in the Spring of 1995. A second Regency, Angel’s Devil, followed that Fall.
more on website...
web | twitter | facebook

New York Times and USA Today bestselling author Amelia Grey read her first romance book when she was thirteen. She’s been a devoted reader of love stories ever since.
Amelia has been happily married to her high school sweetheart for over thirty-five years and she lives on the beautiful gulf coast of Northwest Florida.
She is a two-time winner of the prestigious Booksellers Best Award, and she has also won the Aspen Gold, and Golden Quill awards. Writing as Gloria Dale Skinner, she won the coveted Romantic Times Award for Love and Laughter and the Maggie Award. Amelia’s books have been published in Europe, Indonesia, Turkey, Russia, and Japan. Several of her books have been featured in Doubleday and Rhapsody Book Clubs.
web | facebook 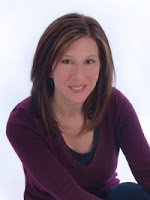 Anna Bennett is the award-winning author of the Debutante Diaries and Wayward Wallflowers series. Her dream of writing romance began during a semester in London, where she fell in love with the city, its history, and its pubs. Now Anna’s living happily-ever-after in Maryland with her family, who try valiantly not to roll their eyes whenever she quotes Jane Austen.
To keep up with all of Anna’s latest book news, be sure to sign up for her newsletter!
By the way, Anna wrote some books under the pen name Anne Barton, and you can find them on the Books page.
Happy reading!
web | twitter