Review - Someone to Cherish 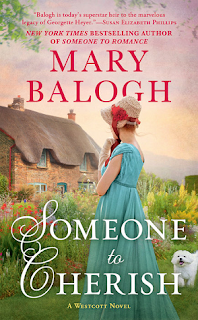 Title:  Someone to Cherish
Author:  Mary Balogh
Series:  Westcott #9
Genre:  Historical Romance
Publisher:  Berkley Books
Format:  Kindle ARC
No. of Pages:   400
Date of Publication:   June 29, 2021
My Rating:   4 Stars
DESCRIPTION:
Is love worth the loss of one's freedom and independence? This is what Mrs. Tavernor must decide in the new novel in the Westcott series from New York Times bestselling author Mary Balogh.
When Harry Westcott lost the title Earl of Riverdale after the discovery of his father's bigamy, he shipped off to fight in the Napoleonic Wars, where he was near-fatally wounded. After a harrowing recovery, the once cheery, light-hearted boy has become a reclusive, somber man. Though Harry insists he enjoys the solitude, he does wonder sometimes if he is lonely.
Lydia Tavernor, recently widowed, dreams of taking a lover. Her marriage to Reverend Isaiah Tavernor was one of service and obedience, and she has secretly enjoyed her freedom since his death. She doesn't want to shackle herself to another man in marriage, but sometimes, she wonders if she is lonely.
Both are unwilling to face the truth until they find themselves alone together one night, and Lydia surprises even herself with a simple question: "Are you ever lonely?" Harry's answer leads them down a path neither could ever have imagined...
Link to purchase the book

MY THOUGHTS:
I have been thoroughly enjoying this series since the very first book, Someone to Love. Oh how I have wanted Harry's story and now here it is!  He lost the title of Earl of Rivendale when it was discovered that his deceased father had a bigamdddddddddddddddddous marriage, thus nullifying Harry's title. Harry went off to fight in the war and got seriously wounded. Mostly recovered, the easygoing young man is now a gruff former soldier, dealing with the after effects of war. Of course, we know it to be PTSD in our day.
Harry's siblings have found their HEAs. He is an uncle several times over. But, he is alone and it seems he might remain that way. However, Harry soon finds himself in the company of the late Reverend's widow Lydia and he is rather drawn to her. Even a bit enchanted by Harry, Lydia is of firm resolve never to marry again as her marriage was less than pleasant. Lydia feels she is better off alone.
With Harry needing healing after the war, and Lydia's unhappiness when she was married, the two just might make the perfect pair. Lydia seemed timid to many, but when she spends time with Harry she slowly comes out of her shell. Harry just might have found the perfect woman, a woman he could indeed cherish.
Each book in this series is complete in and of itself. However, reading each book in the series brings a sense of continuity, if not completeness, when viewing the Westcotts as a whole. I love the relationships in these stories as each books is like a wonderful piece of a huge pie. When I read this book back in April, I thought it was the last in the series. However, I just received my review copy of Someone Perfect, due for release this November.
Many thanks to Berkley Books and to NetGalley for this ARC for review. This is my honest opinion.

I grew up in post-war Wales as Mary Jenkins. It was in many ways an idyllic childhood even though Swansea, my home town, had been heavily bombed during the war, rationing was still on, and material possessions were few. If anyone knew how to stretch a penny to do the work of two, it was my mother.
My sister, Moira, two years older than I, was my constant playmate and soul-mate. We both have a hard time convincing people who did not know us then that we were almost inseparable yet never quarrelled. Our few dolls became our family. They had names, personalities, histories. We used to lie awake in bed at night–until our mother would call up, promising dire consequences if we did not stop talking–inventing stories about our dolls’ antics. On summer days Mam would construct a tent out of blankets, string and clothes pegs attached to the clothesline and the garden fence, and we would play “house” all day. The neighbours must have cringed when we took our dolls for walks in the strollers Dad made for us, complete with solid–and excruciatingly noisy–wooden wheels.
Moira and I both used to fill notebooks with stories. We read voraciously–especially every book of Enid Blyton’s we could get our hands on when we were younger, the classics when we were a little older. We both used to say that we wanted to be authors when we grew up, though the word we used then was authoress. We both fulfilled our dream, though we both financed it with careers as high school English teachers.
Much more about this talented author can be found on her website at: http://www.marybalogh.com.