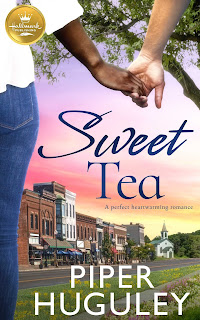 Title:  Sweet Tea
Author:  Piper Huguley
Narrator:  Inger Tudor
Publisher:  Hallmark Publishing
Genre:   Romance
Format:  Audiobook ARC
No. of Pages:   288
Date of Publication:   July 13, 2021
My Rating:   4 Stars
DESCRIPTION:
Southern traditions, family recipes, history, and hope come together in author Piper Huguley’s heartfelt romance from Hallmark Publishing.
Althea Dailey has succeeded beyond her wildest dreams. So why doesn’t she feel more excited about it? She’s about to become the only woman—and the only Black person—to make partner at her prestigious law firm in New York City. When she has to travel South for a case, she pays a long-overdue visit back home to Milford, Georgia. To her surprise, a white man she’s never met has befriended her grandmother.
Jack Darwent wasn’t interested in the definition of success dictated by his father and Southern high society. His passion for cooking led him to his current project: a documentary and cookbook about authentic Southern food. Althea’s grandmother is famous for her cooking at the historically Black Milford College, especially the annual May feast meal. But Althea suspects Jack of trying to steal her grandmother’s recipes.
Although Althea and Jack don’t have the best first impressions of one another, they discover they have more in common than they’d guessed…and even as they learn about one another’s pasts, they both see glimmers of a better future.
This heartwarming romance includes a free Hallmark original recipe.
Link to purchase the book
MY THOUGHTS:
Perhaps once low man (well, woman) on the totem pole, Althea Dailey is about to make partner at a prestigious law firm. A woman. Black. She'd be the first. Living the good life in New York City, she really had no intention on returning home to the South, even to spend time with her family. However, it only takes one phone call before Althea jumps on a plane.
Althea is home to handle a case, but she will also be spending time with her grandmother. She then meets Jack Darwent and is rather disconcerted when he, a white man, seems far too close to her grandmother. The two have a strong familiarity and that proves to be a serious cause for concern for Althea.
Jack is working on a documentary as well as a cookbook and since Althea's grandmother is famous for her cooking, she is the perfect subject for Jack. Althea is concerned that Jack is piggybacking on her grandmother for his own success. How can Althea stop him from doing that. What is more, how can Althea stop her growing attraction to Jack? All she wants to do is to finish working on her case, see to her grandmother's needs and to get back to New York. Doesn't she? Or is being home more comforting than she imagined it would be?
Whether it is the warm sense of home, the scrumptious food mentioned, the slow burn of romance, or the unburdening of baggage, Sweet Tea proved to be a thoroughly enjoyable read. I loved this story and the ending was absolutely perfect.
Many thanks to Hallmark Publishing and to NetGalley for this ARC for review. This is my honest opinion.

Piper Huguley seeks to make new inroads in the publication of historical romance by featuring African American Christian characters.  The Lawyer’s Luck and The Preacher’s Promise, the first books in her “Home to Milford College” series, are Amazon best sellers.  The Mayor’s Mission, published in Winter 2014.  The next entry in the series, The Representative’s Revolt will publish in Spring 2015. She is a 2013 Golden Heart finalist for her novel, A Champion’s Heart—the fourth book in “Migrations of the Heart”. The first book in the series, A Virtuous Ruby, was the first-place winner in The Golden Rose Contest in 2013 and was a Golden Heart finalist in 2014. The first three books in the “Migrations of the Heart” series, which follows the loves and lives of African American sisters during America’s greatest internal migration in the first part of the twentieth century, will be published by Samhain Publishing in 2015.  She lives in Atlanta, Georgia with her husband and son.
web | twitter