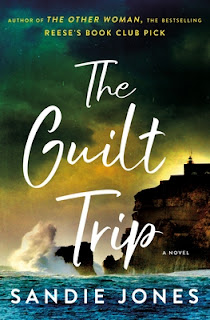 Title:  The Guilt Trip
Author:  Sandie Jones
Publisher:  Minotaur Books
Genre:   Mystery/Thrillers
Format:  Print and Digital ARC
No. of Pages:   320
Date of Publication:   August 3, 2021
My Rating:   4 Stars
DESCRIPTION:
In the vein of The Other Woman, Sandie Jones’s explosive new novel The Guilt Trip will have readers gripped to the very last page.
Six friends.
Rachel and Noah have been friends since they met at university. While they once thought that they might be something more, now, twenty years later, they are each happily married to other people, Jack and Paige respectively. Jack’s brother Will is getting married, to the dazzling, impulsive Ali, and the group of six travel to Portugal for their destination weekend.
Three couples.
As they arrive at a gorgeous villa perched on a cliff-edge, overlooking towering waves that crash on the famous surfing beaches below at Nazaré, they try to settle into a weekend of fun. While Rachel is looking forward to getting to know her future sister-in-law Ali better, Ali can’t help but rub many of the group up the wrong way: Rachel’s best friend Paige thinks Ali is attention-seeking and childish, and while Jack is trying to support his brother Will’s choice of wife, he is also finding plenty to disagree with Noah about.
One fatal misunderstanding . . .
But when Rachel discovers something about Ali that she can hardly believe, everything changes. As the wedding weekend unfolds, the secrets each of them hold begin to spill, and friendships and marriages threaten to unravel. Soon, jumping to conclusions becomes the difference between life and death.
Link to purchase the book
MY THOUGHTS:
A destination weekend. A luxury wedding. Six friends. Something tragic is going to happen. Secrets of the past are beginning to surface. There are three couples involved. Rachel and Jack, Noah and Paige and Will and Ali, the couple about to marry. Rachel and Noah were very good friends when at university. In fact, their friendship might have become more. Instead, twenty years have passed and the two have married other people. Will is Jack's brother and Jack makes it clear that he does not approve of Ali.
Dislike of Ali does not stop with Jack. In fact, Rachel is not too fond of her, and Paige thinks Ali is rather immature. Will everyone settle down and accept Ali, or will long-hidden secrets upset the impending wedding? Meanwhile, something very specific about Ali comes to Rachel's attention and she has to decide if she will tell Will, or even her husband Jack.
Then there is the past to consider, and how it comes to bear with present events. Rachel and Noah are forced to face their pasts, and the fact that they both have strong feelings for one another, despite being apparently happy in their marriages. So, there is drama on many fronts in this compelling read by Sandie Jones.
Many thanks to Minotaur Books and to NetGalley for this ARC for review  This is my honest opinion.

I’ve always enjoyed writing - in fact, English was pretty much the only exam (in my whole life!) that I passed with flying colours. However it took ten years for me to realise that I might actually be able to make a living from doing what I loved.
So for the next two decades I worked as a journalist, (articles below), interviewing celebrities from George Clooney to Justin Timberlake and Ozzy Osbourne to Dame Maggie Smith.
But it wasn’t until 2017, that I decided to try my hand at writing fiction – not with the intention of writing a book that would get published, but just to prove to myself that I had the dedication and willpower needed. Yet once I started, I couldn’t stop!
The result was my debut The Other Woman, which was a 2018 New York Times Bestseller and a Reese Witherspoon Pick. It also sold in fourteen other languages, and to say I’m still reeling from the shock of it all, is something of an understatement!
My second novel The First Mistake was published in 2019, and The Half Sister, which is available to pre-order now, is out in June.
I’m currently writing my fourth, as yet untitled novel, in London, where I live with my husband and three children.
web | twitter