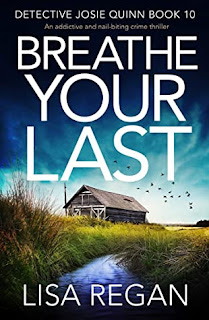 Title:   Breathe Your Last
Author:  Lisa Regan
Series:  Detective Josie Quinn #10
Publisher:  Bookouture
Genre:   Mystery/Thrillers
Format:  Kindle ARC
No. of Pages:   350
Date of Publication:   December 9, 2020
My Rating:   5 Stars
DESCRIPTION:
Josie presses her hands into the center of the drowned girl’s chest and pumps, counting off compressions. She takes in the girl’s beautiful face, her brown eyes glassy. The memory of a champion swimmer on the podium with her teammates—a red swim cap on, her head thrown back in laughter—a stark contrast to the cold, still body before her. Breathe. Just breathe...
The body of a young girl lying face down in a swimming pool—white tennis shoes still on her feet, chestnut hair fanned out like a halo—is the last thing Detective Josie Quinn expects to find on an early morning visit to see her brother before class at Denton University. But when she recognizes the girl’s face as she drags her limp body from the water, there’s only one question racing through Josie’s mind: how does a champion swimmer accidentally drown?
Nysa Somers’ family is distraught. She was a model student, beloved daughter and everybody’s friend. There’s no way she would do anything reckless enough to put her scholarship at risk, let alone her life. It’s up to Josie and her team to piece together what happened in the hours leading up to Nysa’s death, and that begins with finding her missing backpack.
But the bag, discarded in the woods on the nearby campus, contains nothing more than empty food wrappers, Nysa’s phone and a cryptic calendar entry telling her to be a mermaid.
The next day, a terrible housefire envelops the nearby home of a retired fireman, nearly killing his two granddaughters. The last words the little girls heard him mutter before he set the blaze were, be a match.
As the body count rises, it’s only Josie who can see the deadly pattern forming. Can she convince her team that the wrapper found in Nysa’s bag that everyone overlooked is the crucial link they’re missing? Not while her partner, Noah, is avoiding her calls and acting so coldly towards her. Josie knows she must go it alone if she’s going to stop this silent and calculated serial killer before any more precious lives are taken.
But with the killer finally in her sights, Josie takes a deadly risk and finds herself hanging onto life by her fingernails. Can she trust her team to save her, and before it’s too late?
An unputdownable and totally gripping crime thriller from an Amazon, USA Today and Wall Street Journal bestselling author. Perfect for fans of Angela Marsons, Robert Dugoni and Rachel Caine.
Link to purchase the book
MY THOUGHTS:
Detective Josie Quinn goes to visit her brother Patrick at his campus when they soon realize that a young woman has drowned. Josie is more than dismayed when she knows beyond a doubt that the girl is beyond hope. It doesn't take Josie long to realize that the dead girl is a champion swimmer. Did she take her own life or was it an accidental drowning?
When a well-respected fireman apparently sets his house on fire, nearly killing himself and his two granddaughters, Josie immediately sees a link between the college student and the fact that the fireman did start the fire. The clue is clear, but the trail to discovering how the two people were related - as well as other deaths - is not clear.
While Josie is working at a fever pace to stop the murders, she worries for her relationship with fellow officer Noah Fraley. His behavior is odd, but Josie cannot focus on that. Instead, she has to try and stop the murders. Meanwhile, there is an unknown narrator in this story, someone with quite a vendetta and who has the cruelest of intentions.
I found this entry in the Detective Josie Quinn series to be exceptionally thrilling. This was a multi-faceted story which blended Josie's professional and personal life, including her relationship with four-year-old Harris, the son of her deceased husband to whom she was estranged to.
Many thanks to Bookouture and to NetGalley for this ARC for review. This is my honest opinion.
ABOUT THE AUTHOR:

Lisa Regan is the USA Today and Wall Street Journal bestselling author of the Detective Josie Quinn series. Lisa is a member of Sisters In Crime, International Thriller Writers, and Mystery Writers of America. She has a Bachelor's Degree in English and Master of Education Degree from Bloomsburg University. She lives near Philadelphia, Pennsylvania in the U.S. with her husband, daughter, and Boston Terrier named Mr. Phillip.