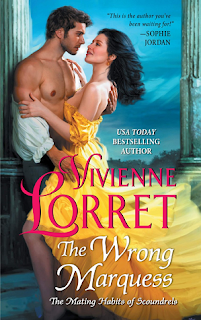 Title:  The Wrong Marquess
Series:  The Mating Habits of Scoundrels #3
Author:  Vivienne Lorret
Publisher:  Avon
Genre:   Historical Romance
Format:  Kindle ARC
No. of Pages:   384
Date of Publication:   June 29, 2021
My Rating:   4 Stars
DESCRIPTION:
USA Today bestselling author Vivienne Lorret continues the Mating Habits of Scoundrels series with a debutante who believes she is destined to marry the lord next door until a fateful encounter with a rogue makes her wonder... if she might be falling for the wrong marquess!
The wrong place...
Elodie Parrish can feel spinsterhood breathing down her neck. That’s the trouble with waiting for the marquess next door her entire life. But Ellie knows if she gives him one last Season, he’ll finally propose. The only problem is, her path keeps crossing with the arrogant Lord Hullworth, who is convinced she has designs on him.
The wrong time...
Brandon, Marquess of Hullworth, never wanted to be “London’s Most Elusive Bachelor,” or have a horde of hopeful debutantes and their scheming mamas follow him around. His past has left him too jaded to consider marrying any of them. At least, that’s what he thinks... until he meets Ellie. She’s quirky, opinionated, blushes easily, and drives him absolutely wild. The only problem is, she believes she’s in love with someone else.
Ellie never imagined that one sultry summer could change everything. But the more time she spends with Brandon researching her book on the mating habits of scoundrels, the more she wonders if she might be falling for…
The Wrong Marquess
Link to purchase the book
MY THOUGHTS:
Rogue or Marquess? Elodie Parrish has to choose. But why are both options for her to consider? In fact, why would she even think of going after a rogue? Or is the rogue going after her? Whatever the case, Elodie needs to marry. She is facing spinsterhood. Friends with other debutantes, two of who recently married, and this leaves Elodie as The Mating Habits of Scoundrels trilogy draws to a close.
Elodie has a chance. Doesn't she? After all, George, Marquess of Nethersole, lives right next door and Elodie has been waiting for him for years. She is rather certain that this is the Season when he will finally propose. Why then, is she constantly running into Brandon, Marques of Hullworth, who besides being a rogue, feels that Elodie has her sights set on him?

Elodie must consider whatever feelings she has for George, especially as these run ins with Brandon just might be the start of something entirely different. A growing attraction neither of them is prepared to admit, yet find it impossible to resist? What an enjoyable story, rich with great characters, including a reedemable rogue.
Although The Wrong Marquess is the third book in a series, it could do well as a standalone, as the story focuses on Elodie and Brandon. However, since I thoroughly love continuity, I did read and enjoy the first two books in this trilogy, Lord Holt Takes a Bride and My Kind of Earl, both of which I highly recommend.

Many thanks to Avon and to NetGalley for this ARC for review. This is my honest opinion. 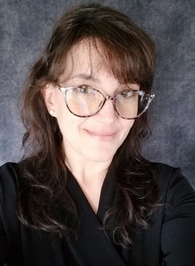 USA Today bestselling author VIVIENNE LORRET transforms copious amounts of tea into words. She is an Avon author of works including the Wallflower Wedding series, the Rakes of Fallow Hall series, the Season’s Original series, the Misadventures in Matchmaking series, the Mating Habits of Scoundrels series, and the upcoming Liar’s Club series. For more information on her books, sign up for her newsletter.
web | twitter