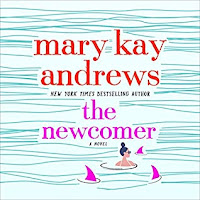 Title:  The Newcomer
Author:  May Kay Andrews
Narrator:   Kathleen McIerney
Publisher:  St. Martin's Press
Genre:   Romance; Women's Fiction
Format:  Audiobook ARC
No. of Pages:   448
Date of Publication:   May 4, 2021
My Rating:   5 Stars
DESCRIPTION:
Mary Kay Andrews, the New York Times bestselling author and Queen of the Beach Reads delivers her next page-turner for the summer with The Newcomer.
In trouble and on the run...
After she discovers her sister Tanya dead on the floor of her fashionable New York City townhouse, Letty Carnahan is certain she knows who did it: Tanya’s ex; sleazy real estate entrepreneur Evan Wingfield. Even in the grip of grief and panic Letty heeds her late sister’s warnings: “If anything bad happens to me—it’s Evan. Promise me you’ll take Maya and run. Promise me.”
With a trunkful of emotional baggage...
So Letty grabs her sister’s Mercedes and hits the road with her wailing four-year-old niece Maya. Letty is determined to out-run Evan and the law, but run to where? Tanya, a woman with a past shrouded in secrets, left behind a “go-bag” of cash and a big honking diamond ring—but only one clue: a faded magazine story about a sleepy mom-and-pop motel in a Florida beach town with the improbable name of Treasure Island. She sheds her old life and checks into an uncertain future at The Murmuring Surf Motel.
The No Vacancy sign is flashing & the sharks are circling...
And that’s the good news. Because The Surf, as the regulars call it, is the winter home of a close-knit flock of retirees and snowbirds who regard this odd-duck newcomer with suspicion and down-right hostility. As Letty settles into the motel’s former storage room, she tries to heal Maya’s heartache and unravel the key to her sister’s shady past, all while dodging the attention of the owner’s dangerously attractive son Joe, who just happens to be a local police detective. Can Letty find romance as well as a room at the inn—or will Joe betray her secrets and put her behind bars? With danger closing in, it’s a race to find the truth and right the wrongs of the past.
A Macmillan Audio production from St. Martin's Press/
Link to purchase the book
MY THOUGHTS:
Perhaps it was an omen. Maybe it was gut feeling. Tanya told her sister Letty that if anything happened to her that blame would lie wither her ex, real estate entrepreneur Evan Wingfield. She had an additional message, however. Tanya made Letty promise to take her daughter Maya and run. Maya does not know why her aunt Letty is so rushed. She does not understand what happened to her mother. She does not know why they are in her mother's car. As far as Letty is concerned, she is fairly well freaked out, without a second to spare, even to grieve the death of her sister. She simply has to do what she promised. Take Maya and run, and protect her down to her last breath.
Letty does not even know where she is going, or even certain who she is running from. Did Evan kill her sister? Would he be a danger to Maya? She can't even trust the police but cannot even explain why. Tanya did one additional thing - she had a "go-bag" - filled with money and a huge diamond ring - ready for Letty to grab. So, Letty and Maya won't want for much for the time being. But, living life on the run. How could that possibly happen?
Letty struggles to find a place to stay that first night. She also has to try and soothe a constantly crying Maya. They land at a place called The Murmuring Surf Hotel. The owner seems kind, as does the owner's son Joe. However, not only is Joe a police detective, he is wary of Letty and whatever her circumstances are. If Letty is on the run how will she ever discover who killed her sister and why. Also, living life on the run leaves very little chance to trust anyone, especially the local police in the form of Joe.
What a thrilling read - or in this case - what a thrilling audiobook. The tension was so thick you could cut it with a knife. The danger was palbable. The sadness was powerful. The pacing was excellent. The characterization was exceptional, even when a woman named Vikki entered the fray. All of these things led to a recipe for a fantastic book.
Many thanks to St. Martin's Press and to NetGalley for this ARC for review. This is my honest opinion. 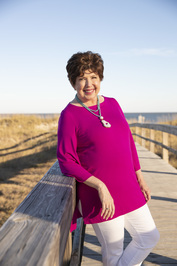 MARY KAY ANDREWS is the New York Times bestselling author of 27 novels (including Hello, Summer; Sunset Beach; The High Tide Club; The Weekenders; Beach Town; Save the Date; Ladies’ Night; Christmas Bliss; Spring Fever; Summer Rental; The Fixer Upper; Deep Dish; Blue Christmas; Savannah Breeze; Hissy Fit; Little Bitty Lies; and Savannah Blues), and one cookbook, The Beach House Cookbook.
A native of St. Petersburg, Florida, she earned a B.A. in journalism from The University of Georgia. After a 14-year career working as a reporter at newspapers including The Savannah Morning News, The Marietta Journal, and The Atlanta Journal-Constitution, where she spent the final ten years of her career, she left journalism in 1991 to write fiction.
Her first novel, Every Crooked Nanny, was published in 1992 by HarperCollins. She went on to write ten critically acclaimed mysteries under her real name, Kathy Hogan Trocheck. In 2002, she assumed the pen name Mary Kay Andrews with the publication of Savannah Blues. In 2006, Hissy Fit became her first New York Times bestseller, followed by twelve more New York Times, USA Today and Publisher’s Weekly bestsellers. To date, her novels have been published in German, Italian, Polish, Slovenian, Hungarian, Dutch, Czech and Japanese.
She and her family divide their time between Atlanta and Tybee Island, GA, where they cook up new recipes in two restored beach homes, The Breeze Inn and Ebbtide—both named after fictional places in Mary Kay’s novels, and both available to rent through Tybee Vacation Rentals. In between cooking, spoiling her grandkids, and plotting her next novel, Mary Kay is an intrepid treasure hunter whose favorite pastime is junking and fixing up old houses.
web | twitter | facebook | instagram