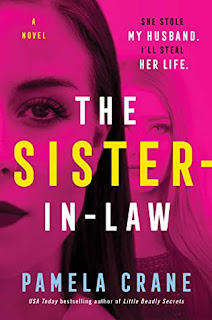 Title:  The Sister-In-Law
Author:  Pamela Crane
Publisher:  William Morrow
Genre:   Mystery/Thrillers
Format:  Kindle ARC
No. of Pages:   352
Date of Publication:  August 10, 2021
My Rating:   4 Stars
DESCRIPTION:
From the USA Today bestselling author of Little Deadly Secrets comes a gripping story about the frailty of family and a battle of wills between a wife and a sister-in-law, bent on revenge.
She stole my husband. So I'd steal her life.
The Wife
Lane won Candace's heart over chocolate martinis and karaoke. But weeks into their whirlwind marriage, Candace realized Lane came with burdensome baggage in the form of his possessive live-in sister and her eerily watchful six-year-old son. Lane had a secret that seemed to hold him hostage, and Candace would do anything to uncover it.
The Sister-in-Law
Harper was the kind of woman who cooked homemade meals and dusted under the furniture. It was the least she could do for her brother after her husband's mysterious death, and Lane took her and her kids in. Then Candace showed up like a tornado passing through, threatening and destructive. But Harper had other plans for her new "sister," plans Lane could never find out about.
The Husband
All Lane had ever wanted was a white-picket-fence life. The wife. The two-point-five kids. The happy little family. Everything seemed to be falling into place with Candace ... until Harper's jealous streak got in the way, again. But choosing between his sister and wife would be costly ... and knowing Harper, the price would be blood.
Link to purchase the book
MY THOUGHTS:
Lane is a man caught in the middle. His wife. His sister. Only one can be first place in his life for him, and by rights, it should be his new wife Candace. However, Lane shares a secret with his sister Harper, and keeping this secret proves to be the source of great contention in his marriage.
Harper was the quintessential wife. A stay-at-home mother to two children, and more than happy. However, one day she finds her husband dead at his own hand. She has led a privileged life and knows that a big life insurance policy will not pay out if his death is ruled a suicide. Relying on her brother Lane for advice and help, Harper makes an irreversable decision.
Lane and Harper carry out a plan that eventually has Harper and her children moving in with Lane and Candace. Harper is hoping that the police will not rule her husband's death a suicide and that she can collect on the policy. However, for now, she does not have enough means to support her family, thus her need to move in with Lane.
From the instant they lock eyes, Harper and Candace are at war. An example of their contention is that Harper is industrious and Candace is lazy. Also, Candace is not comfortable around Harper's children, especially her young son. Then there is the fact that Candace is hiding a secret, a secret that Harper soon discovers.
This thrilling book proved to be a roller coaster on many levels - whether it is the secrets that are hoevering about, the actions Lane and Haprer took, or Harper's past where her children are concerned.
Many thanks to William Morrow and to NetGalley for this ARC for review. This is my honest opinion. 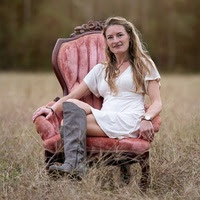 PAMELA CRANE is a USA TODAY best-selling author and professional juggler. Not one who can toss flaming torches in the air, but a juggler of four kids, a writing addiction, and a horse rescuer. She lives on the edge (her Arabian horse can tell you about their wild adventures while trying to train him) and she writes on the edge...where her sanity resides. Her thrillers unravel flawed women who aren't always pretty. In fact, her characters are rarely pretty, which makes them interesting...and perfect for doing crazy things worth writing about. When she's not cleaning horse stalls or changing diapers, she's psychoanalyzing others.
web | twitter | instagram