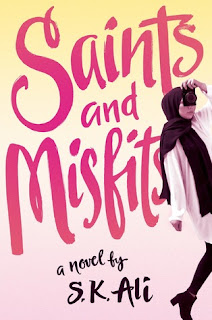 How much can you tell about a person just by looking at them?

Janna Yusuf knows a lot of people can’t figure out what to make of her…an Arab Indian-American hijabi teenager who is a Flannery O’Connor obsessed book nerd, aspiring photographer, and sometime graphic novelist is not exactly easy to put into a box.

And Janna suddenly finds herself caring what people think. Or at least what a certain boy named Jeremy thinks. Not that she would ever date him—Muslim girls don’t date. Or they shouldn’t date. Or won’t? Janna is still working all this out.

While her heart might be leading her in one direction, her mind is spinning in others. She is trying to decide what kind of person she wants to be, and what it means to be a saint, a misfit, or a monster. Except she knows a monster…one who happens to be parading around as a saint…Will she be the one to call him out on it? What will people in her tightknit Muslim community think of her then?
Link to purchase the book
MY THOUGHTS:
Janna Yusuf doesn't know where she fits in. Part of the reason is her culture. Part of it is her environment. And part of it is her dreams. Who is Janna and what will her future bring? Being of mixed culture brings certain problems in Janna's life. Her upbringing plays a role. Of that there is no doubt. What is more is that Janna has certain expectations - from herself and from what others expect of her.
What happens when a boy not of her race (Arab Indian-American hijabi) catches her eye? Will Janna go against the norm expected of her and date? And date a boy of a different race? Then there is the fact that an influential individual in the Muslim community is not what they are said to be. This is further cause for the choices Janna makes.
What an exceptional debut novel! Although published several years ago, I am glad that this came across my radar because I found the book, although written for a younger audience, to be a riveting, thought-provoking read. Some of the issues were rather painful to read, but I loved how strong Janna was. In fact, the story kind of dropped off, but there is a second book, Misfit in Love, and I definitely plan on reading that one soon,
Many thanks to Salaam Reads and to NetGalley for this ARC for review. This is my honest opinion. 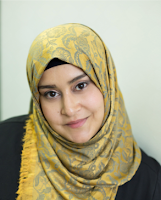 S. K. Ali* is the author of Saints and Misfits (Simon & Schuster, 2017), a finalist for the American Library Association’s 2018 William C. Morris award. Her debut novel won critical acclaim for its portrayal of an unapologetic Muslim-American teen’s life. Saints and Misfits was featured on several Best Teen Novels of 2017 lists including from Entertainment Weekly, Kirkus Reviews and the New York Public Library. It was also a CBC Canada Reads 2018 longlist title and featured in the Globe and Mail, Toronto Star, NBC News, Huffington Post, Salon, Bustle, CBC Radio’s The Next Chapter, The Social, The Morning Show and other North American media.
Sajidah holds a degree in Creative Writing from York University and has written about Muslim life for various outlets, including the Toronto Star and NBC News. Her second novel, Love From A to Z (Simon & Schuster, 2019), a story about finding love in the time of Islamophobia, was a Today Show pick, a Goodreads Readers Choice Nominee and on several best 2019 YA lists, including Kirkus and Entertainment Weekly’s top ten. Love from A to Z was the first YA title chosen to be part of the Today Show’s “Read With Jenna” book club.
Her picture book, The Proudest Blue (Little Brown, 2019), co-authored with Ibtihaj Muhammad, debuted on the New York Times Bestseller list and was featured in the New York Times, NPR, Amazon Editor’s Choice, The Today Show, among other media. Along with We Need Diverse Books co-founder, Aisha Saeed, Sajidah is the co-editor of a Middle Grade anthology called, Once Upon an Eid (Amulet, 2020), winner of the Middle East Book Honor Award and a Kirkus and School Library Journal Best Book of 2020.
S. K. Ali lives in Toronto with her family, which includes a very vocal cat named Yeti.
*first name: Sajidah (Saj-da)
web | twitter

Email ThisBlogThis!Share to TwitterShare to FacebookShare to Pinterest
Labels: 4 Stars, ownvoices, series, YA