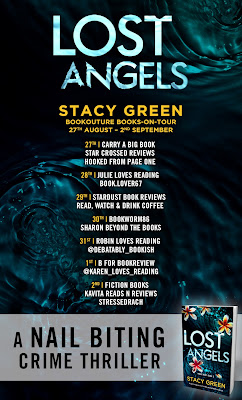 DESCRIPTION:
On her hands and knees, Nikki moved to the other side of the body. She couldn’t stop her fingers from trembling as she brushed the dark hair off the victim’s face. She couldn’t look away. “I know her…”

When Special Agent Nikki Hunt is called to the Boundary Waters near Stillwater, Minnesota, it’s not just the cold that shocks her to her core: the body of a young woman has been found frozen beside a remote lake. Nikki is devastated to see the victim is her childhood friend Annmarie, and she recognizes the velvet ribbon tied in her hair as the hallmark of a serial killer who she has been hunting for years.

Desperate for justice, Nikki throws herself into the case. But she is shaken by what she finds at Annmarie’s home: a dead-bolt on her front door and a map in the spare room, with the locations of murdered women circled in thick, red marker. Did Annmarie know she was next? Then Nikki finds out that the killer has left a clue in Annmarie’s bedroom: a photo of Nikki’s mother that no one has ever seen. Has the murderer at large been in Nikki’s life since she was a child?

Nikki soon realizes that the key to unlocking this case is in her own family, but digging up the past could put her own daughter in danger. She has spent her whole life protecting the ones she loves, but to find this killer Nikki might have to risk everything…

Fans of Karin Slaughter, Lisa Gardner and Robert Dugoni will be completely addicted to this heart-pounding thriller. Once you start reading, the twists and turns will have you racing towards the end.
BUY LINK:
Amazon: https://geni.us/B08WRTVTWGCover
Apple: http://ow.ly/SpGv50DNBet
Kobo: http://ow.ly/jt1J50DNB7P
Google: http://ow.ly/Zmd150DNBgO 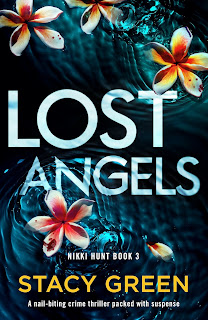 Title:   Lost Angels
Author:  Stacy Green
Series:  Nikki Hunt #3
Publisher:  Bookouture
Genre:   Mystery/Thrillers
Format:  Kindle ARC
No. of Pages:   236
Date of Publication:   August 27, 2021
My Rating:   4 Stars
Nikki Green’s nearly loses her composure at her latest crime scene. She is beyond devastated to discover that the victim was her childhood friend Annmarie  What is more is she knows exactly who the killer is, or at least who he calls himsself, Frost. However, he has been tantalizingly elusive. Nikki and her team have been searching for Frost for years.
As a Special Agent with the FBI, Nikki has pretty much seen it all. However, this was her friend. Clues immediate identify the slippery killer to be Frost. He has left his calling card. Nikki cannot help but wonder how her dear friend became the latest victim. Nikki is truly shaken to her core, espeically when another clue proves that the killer just might have his sights set on Nikki herself.
Nikki has further cause for worry. She has a young daughter named Lacey, and is determined to protect her at all costs. Currently sharing custody with her ex, in fact, he is also an FBI agent, Nikki is getting serious about another man in her life, Rory. However, her personal life is forced to take a back seat while trying to track down the killer before there are any more victims.
Nikki investigates as best she can, despite the hair-raising feelings she gets the deeper the search for the killer goes. This thrilling, fast-paced read was wrought with danger and filled with tension from the very first page. There were moments of intense sadness in this story, which led to an emotional conclusion. I am definitely anticipating the next read in this exciting series.
Many thanks to Bookouture and to NetGalley for this ARC for review. This is my honest opinion.
ABOUT THE AUTHOR:

Stacy Green is the bestselling author of more than 10 award-winning novels and nonfiction short stories. The ERIN PRINCE SERIES has been optioned for television by a major production team. ALL GOOD DEEDS (Lucy Kendall #1) won a bronze medal for mystery and thriller at the 2015 IPPY Awards. TIN GOD (Delta Crossroads #1) was runner-up for best mystery/thriller at the 2013 Kindle Book Awards. Stacy started her career in journalism before becoming a stay at home mother and rediscovering her love of writing.