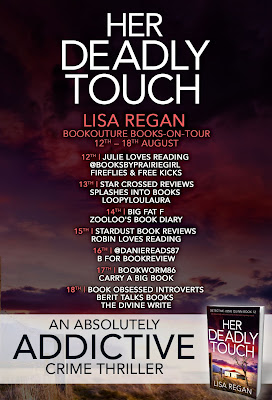 The woman is kneeling at a gravestone, her hair blowing in the breeze, a bunch of wilting yellow daffodils on the grass beside her. Her eyes are fixed on the ground and her mouth is parted in a silent prayer. But the wax dripping from her cold blue lips means it’s already too late to save her…

On her first day back with the Denton PD after a major trauma, Detective Josie Quinn is on the hunt for a missing woman, Krystal Duncan, the mother of one of five children killed in a devastating school bus crash. Hours later, Josie finds Krystal’s body beside her daughter’s grave, her lips sealed together forever with wax.

Forensics match the wax to one of the candles lit in memory of the sweet little souls who died, giving Josie her first lead to a support group made up of the parents who lost children in the crash. Painstakingly dissecting the lives of these grieving couples, it’s clear to Josie that each of them is hiding something about the day of the accident—but whose secret is worth killing for?

The case takes an agonizing turn when the body of another young mother is found near the site of the bus crash. Someone connected to the accident is out for revenge. As the members of the support group are picked off one by one, every second counts for Josie to save the lives of these loving parents who have already suffered the loss of those they treasured most…

An absolutely gripping and totally unputdownable crime thriller from an Amazon, USA Today and Wall Street Journal bestselling author. Be warned, this book will keep you up all night! Perfect for fans of Angela Marsons, Robert Dugoni and Rachel Caine. 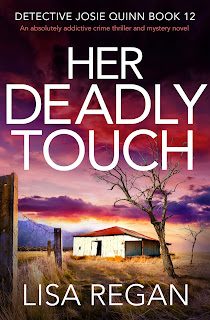 Title:   Her Deadly Touch
Author:  Lisa Regan
Series:  Detective Josie Quinn #12
Publisher:  Bookouture
Genre:   Mystery/Thrillers
Format:  Kindle ARC
No. of Pages:   281
Date of Publication:   August 12, 2021
My Rating:   4 Stars
Detective Josie Quinn is one day away from going back to work after a four-month suspension. In truth, she experienced a major trauma and the suspension was actually a kindness as Josie needed time to deal with a devastating loss. She is heading to her deceased husband Ray's grave, a place that actually calms her. Meanwhile, Josie is recently married to Noah Fraley and the time she has spent away from work has been helping to heal her.
A woman comes running to Josie at the gravesite. She begs Josie to help a woman there. Sadly, the woman is dead, a clear case of murder. Josie recognizes the murdered woman. She had been missing for several days. There is an immediate tie-in to the woman and to a two-year-old horrific bus accident that took the life of several students. Why now, two years later?
Josie and the other detectives are forced to interview the parents of the deceased children. Each of them seems a bit off, holding secrets that must be revealed before another life is lost. Something is going on and it soon appears that revenge is the motive. Can Josie deal with now being back at work while still coping with the loss she herself experienced and keep everything together?
Her Deadly Touch is another thrilling - albeit heartbreaking at times - story in the terrific Detective Josie Quinn series. I have loved this series since the third title, and the stories get better and better. I love seeing Josie on both a personal and professional level, including seeing her far she has come with her relationship with Noah, especially now that they are married. I am very much looking forward to the next book in this exciting series.
Many thanks to Bookouture and to NetGalley for this ARC for review. This is my honest opinion.
ABOUT THE AUTHOR:

Lisa Regan is the USA Today and Wall Street Journal bestselling author of the Detective Josie Quinn series. Lisa is a member of Sisters In Crime, International Thriller Writers, and Mystery Writers of America. She has a Bachelor's Degree in English and Master of Education Degree from Bloomsburg University. She lives near Philadelphia, Pennsylvania in the U.S. with her husband, daughter, and Boston Terrier named Mr. Phillip.