Review - Someone to Romance 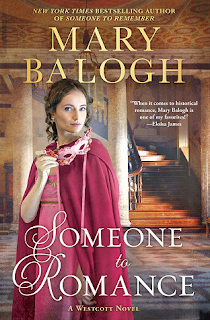 Love comes when you least expect it in this captivating new novel in the Wescott Regency romance series from New York Times bestselling author Mary Balogh.

Lady Jessica Archer lost her own interest in the glittering excitement of romance after her cousin and dearest friend, Abigail Westcott, was rejected by the ton when her father was revealed to be a bigamist. Ever practical, however, once she's twenty-five, she decides it's time to wed. Though she no longer believes she will find true love, she is still very eligible. She is, after all, the sister of Avery Archer, Duke of Netherby.

Jessica considers the many qualified gentlemen who court her. But when she meets the mysterious Gabriel Thorne, who has returned to England from the New World to claim an equally mysterious inheritance, Jessica considers him completely unsuitable, because he had the audacity, when he first met her, to announce his intention to wed her.

When Jessica guesses who Gabriel really is, however, and watches the lengths to which he will go in order to protect those who rely upon him, she is drawn to his cause—and to the man.

Lady Jessica Archer is pretty much on the shelf. Approaching twenty-five years of age, Jessica decides that this season will be the time to find a marriage mate. Having long given up on love, Jessica sets out a plan and decides to choose as wisely as possible. Meanwhile she runs into Gabriel Thorne, not long having returned from visiting America and is now set to receive an inheritance. Through a sudden and odd set of circumstances, Gabriel announces that he and Jessica re betrothed.

Quite naturally, Jessica is shocked, and rather annoyed. Gabriel is certainly upsetting her plans to make her own choice, but she soon sees things about him that are rather intriguing. As time moves on it proves increasingly difficult for Jessica to resist Gabriel's charms and their attraction to one another goes full throttle.

I have to admit that I love Gabriel. While he should be working towards gaining his due inheritance, as well as caring for his family, he quickly claims Matilda and the fact that love isn't even on the table doesn't slow him down one bit. Meanwhile, I loved Jessica as well. Simply agreeing to marry Gabriel is not enough. She wants and demands more than marriage in name only, so the journey to that effect was rather sweet.

What I love about this book, and it has happened more than once in this series, is the fact that the protagonists are a bit older. Today, of course, twenty-five is certainly not old, but back then the ton had a much harsher view on women who hadn't married long before them. I have to admit to being enamored by this series and have read it from the very beginning.

Each story in this series has a side story, and the side story in this book involves Gabriel's past and how it is affecting his present. The fact that Matilda joins Gabriel's family when it comes to setting matters right fits right in with the romance that shows the love that blooms between them. As always, this was an enjoyable book in the series, and I am definitely looking forward to the next one, Someone to Cherish, set for release in 2021.

The previous titles and their review links are listed here:

My sister, Moira, two years older than I, was my constant playmate and soul-mate. We both have a hard time convincing people who did not know us then that we were almost inseparable yet never quarrelled. Our few dolls became our family. They had names, personalities, histories. We used to lie awake in bed at night–until our mother would call up, promising dire consequences if we did not stop talking–inventing stories about our dolls’ antics. On summer days Mam would construct a tent out of blankets, string and clothes pegs attached to the clothesline and the garden fence, and we would play “house” all day. The neighbours must have cringed when we took our dolls for walks in the strollers Dad made for us, complete with solid–and excruciatingly noisy–wooden wheels.
Moira and I both used to fill notebooks with stories. We read voraciously–especially every book of Enid Blyton’s we could get our hands on when we were younger, the classics when we were a little older. We both used to say that we wanted to be authors when we grew up, though the word we used then was authoress. We both fulfilled our dream, though we both financed it with careers as high school English teachers.