Review: Someone to Hold 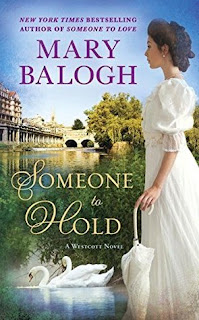 Humphrey Westcott, Earl of Riverdale, has died, leaving behind a fortune and a scandalous secret that will forever alter the lives of his family—sending one daughter on a journey of self-discovery...

With her parents’ marriage declared bigamous, Camille Westcott is now illegitimate and without a title. Looking to eschew the trappings of her old life, she leaves London to teach at the Bath orphanage where her newly discovered half-sister lived. But even as she settles in, she must sit for a portrait commissioned by her grandmother and endure an artist who riles her every nerve.

An art teacher at the orphanage that was once his home, Joel Cunningham has been hired to paint the portrait of the haughty new teacher. But as Camille poses for Joel, their mutual contempt soon turns to desire. And it is only the bond between them that will allow them to weather the rough storm that lies ahead...

If you have read Someone to Love by Mary Balogh you will remember a bit about Camille Wescott. Camille is the half sister to Anna Snow. We met Anna in the first book of the Wescott series after she discovered that she was the daughter of the Earl of Riverdale, who recently passed away. When Anna was introduced to her family and was able to claim the wealth left to her, this is when Camille and her family were permanently displaced. As it turned out, Camille and her siblings were illegitimate children of the Earl. Just as Anna had to find her a place in the new world that she was living in, it is now Camille’s turn. Unfortunately, she must now work for a living. She takes a temporary job at an orphanage. This is the very same orphanage where Anna grew up. Almost immediately, Camille learned that she is very good with young children and at teaching.

Joel Cunningham is an accomplished artist and is trying to adjust to the fact that the woman that he thought he was in love with is now married. Joel grew up in the same orphanage as Anna and the two were lifelong friends. He also teaches at the very same orphanage. When Joel meets Camille, he does not like her. Although she is the half sister to Anna, she is nothing like her and he doesn’t even find her beautiful. Not at first. But things happen in Joel’s life that make him need a friend. This friend is none other than Camille. He begins to sense a deep beauty in her, both inside and out. This does not happen until he is able to stop comparing the two.

It is no surprise that Camille did not like Anna when they first met. After all, she lost everything due to Anna. But now she is becoming a better woman. This is thankful because Joel does not like the fact that she does not treat Anna with respect. The question is whether or not Camille and Anna will ever come around to being friends. Meanwhile, the romance between Camille and Joel was difficult. After all, at one time he had strong feelings for Anna. Things evolve, however, as they begin spending time together.

One almost spoiler that I will add to this review is how wonderful Camille was with the young children. It was very touching. This clearly illustrates the growth in her character. If you remember Camille from the first story you may know why this is something worth mentioning. There were some teary-eyed moments that I experienced while reading Someone to Hold. There is so much to offer in this book that I am pleased to have given it a high rating. One example of this is Camille's and Joel's love for children. This was truly endearing and several times I was left with a lump in my throat while reading this story.

I would be remiss if I didn’t at least discuss Joel. I really liked him from the very first story. As a matter of fact I really wished that it was him who found love in the next in the series. What a delight it was to discover that he does have his chance here. He is a fine man, a wonderful artist, and a perfect counterpart to Camille. As the story reveals, they share a similar illegitimate past, which goes a long way towards their compatibility.
Mary Balogh has given us a couple that we got to know on several levels. This made for a very easy to read book, one that I was able to enjoy in just a few sittings. Someone to Hold is appropriately titled with regard to the content of this story. It is utterly endearing and I thoroughly enjoyed reading it. When I received the title Someone to Trust for review for November, I then discovered that this was the fifth book in a series. I am glad that there was a gap in the time and it’s upcoming release date because it gave me the opportunity to obtain the first four titles in order to read them as well. I recently read Someone to Love and found it to be quite enjoyable. I very much look forward to continuing the series as soon as possible.

There is enough of a backstory in this book so that it could serve as a standalone. However if you want to enjoy the whole experience as well as getting to know the entire Wescott family, I do encourage you to read it in order.

I was thrilled to learn that Mary Balogh has written over 150 books with 16 series!