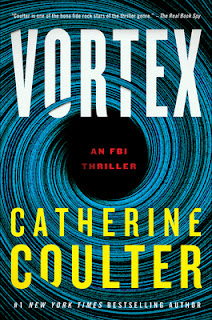 Title:  Vortex
Author:  Catherine Coulter
Series: FBI Series #25
Genre:   Mystery/Thrillerrs
Publisher:  Gallery Books
Format:  Kindle ARC
No. of Pages:  400
Date of Publication:  August 10, 2021
My Rating:  5 Stars
DESCRIPTION:
In the latest installment in Catherine Coulter’s #1 New York Times bestselling FBI Thriller series, agents Sherlock and Savich find themselves dealing with powerful pieces of the past that could have dire consequences in the present.
Seven years ago, Mia Briscoe was at a frat party with her best friend Serena when a fire broke out. Everyone was accounted for except Serena. She was never heard from or seen again. Now Mia is an investigative journalist covering the political scene in New York City, but she hasn’t given up trying to find out what happened to her friend that night. When an old photo taken at the frat party gives her clues, Mia realizes she knows just where to look. She enlists FBI agent Sherlock’s help to uncover a sinister string of events going all the way back to that disastrous party. But some very powerful—and very dangerous—people will do anything to keep the past buried.
CIA Operative Olivia Hildebrandt is a team leader on a mission in Iran to exfiltrate a betrayed undercover operative. She’s nearly killed by an exploding grenade and saved by a team member. After leaving Walter Reed Hospital, not only has that team member disappeared but two men come to her house to kill her. Savich believes their attack on Olivia is a direct result of the compromised mission in Iran. What intelligence was at stake? Who betrayed them? Savich quickly finds he is now a target himself and unseen enemies will stop at nothing, including murder.
Link to purchase the book
MY THOUGHTS:
Mia Briscoe never got over the fact that her best friend went missing from a party seven years previously, never to be seen again. The trail has long gone cold, but Mia is determined to find out what happened to her, especiay as she sees old photos that have been sent to her. Who is sending the photos and why now? FBI Agent Lacey Sherlock gets called into help, but soon discovers that asking about the past presents incredible danger.
There is a second case going on, and it is involving the investigation headed by CIA Operative Olivia Hildebrandt and Sherlock's husband, also a Special Agent of the FBI, Dillon Savich, are called in th extract a missing agent. Things get too close to home for Olivia and Dillon has to work hard to keep her safe.
Vortex is another exciting book in the FBI Thriller series. This is book number 25 and it proves to be just as gripping as every previous book in the series. Savich and Sherlock are still going strong. I love them as a couple and their cases are always riveting making this installment another page-turner.
Many thanks to Gallery Books and NetGalley for this ARC to review in exchange for my honest opinion.
ABOUT THE AUTHOR: