BLOG TOUR - Mystery at the Church 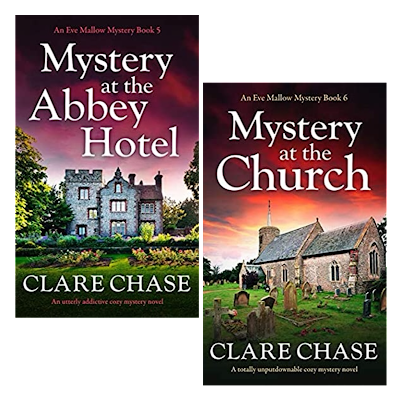 Today's blog post is for Mystery at the Church by Clare Chase. I have enjoyed this series and did read the first three titles. However, since I hadn't read Mystery at the Abbey Hotel, I decided to read and review it and include it in this post. 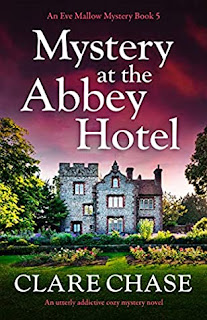 Title:   Mystery at the Abbey Hotel
Author:  Clare Chase
Series:  Eve Mallow Mystery #5
Genre:   Cozy Mystery
Publisher:  Bookouture
Format:  Kindle ARC
No. of Pages:   320
Date of Publication:   April 12, 2021
My Rating:   4 Stars
DESCRIPTION:
Eve Mallow’s stay at the luxurious Abbey Hotel takes a turn for the suspicious when the owner is murdered – leaving Eve surrounded by suspects!
Saxford St Peter is Eve Mallow’s beloved home, but she can’t resist the chance to spend a weekend in the nearby Abbey Hotel, famed for its glamorous owner Debra Moran and an array of celebrity guests. For a confirmed people-watcher like Eve, it’s perfect: she can observe the rich and famous while sipping tea in the gardens, her faithful dachshund Gus by her side.
But her relaxing break takes a shocking turn when Debra is found lying dead in the shadowy woods around the hotel. One of Eve’s fellow guests didn’t come to the Abbey for fine food and delightful décor – but to kill.
When the investigation gets underway, Eve finds herself trapped with a wide range of suspects. Could it be Debra’s new friend Harper, who inherits everything? Her ex-husband Chester, still seething over their messy divorce? Or her estranged sister Amelia, who came hoping for reconciliation, only for Debra to shut the door in her face?
As Eve roams the hotel, searching for clues and hunting down alibis, she uncovers a whole host of secrets. But can she find the truth before the killer brings her holiday to a deadly end?
Link to purchase the book
MY THOUGHTS:
Eve Mallow is a part-time obituary writer and right now she is badly in need of a break. She intends on relaxing at the Abbey Hotel for a few days. She loves people watching and there is no better place to do that than at the luxurious hotel. However, soon the owner, Debra, is found dead. It is clear that Debra's death was murder, and this leaves the curious Eve with a bevy of suspects. Eve intends on asking as many questions as she can, but, per usual for her, she runs right into Detective Inspecter Palmer and he tells her to keep out of the investigation.
Of course Eve does not listen to Palmer. Instead, with her trusty sidekick Gus, her beloved daschhund, and her blooming relationship with Robin Yardley, Eve is fully prepared to find out who killed Debra. Robin is now a garderner, a former police officer with good reason to now be working as a gardener, and their relationship has to be kept quiet for specific reasons.
One thing that Eve liked about the Abbey Hotel is the fact that it is a dog-friendly establishment. There were other things that drew her to the lovely place, now tainted with murder. With the fact that Eve will be writing Debra's obituary she manages to dig deeper, to talk to as many people as possible and to ask the difficult questions. Not surprisingly Eve soon learns that more than one person would have benefited by Debra's death, and these include Debra's ex-husband Chester and her estranged sister Amelia, among others. So, Eve must deduce who could have benefited the most and bring the truth to light, all while keeping her distance from DI Palmer.
I have been enjoying this series from the first book, Mystery on Hidden Lane. Quite typical of cozy mysteries, this story is set in a small village, yet it is beset by murders that are being solved by an amateur detective. My kind of read. One thing that this book, Mystery at the Abbey Hotel does, however, is to reveal more about Robin and why he and Eve are keeping their relationship under wraps. Although this book could be read as a standalone, just this reveal illustrates the benefit of reading a series from the beginning.
Many thanks to Bookouture and to NetGalley for this ARC for review. This is my honest opinion.
**Featured Blog Tour post** 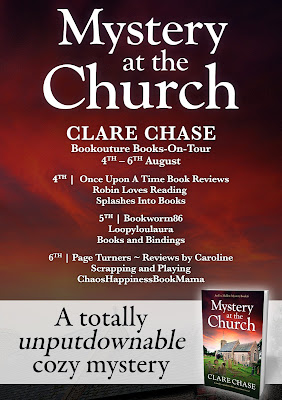 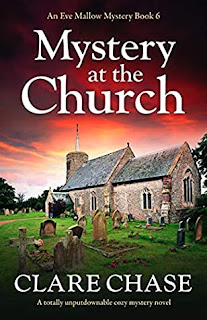 Title:   Mystery at the Church
Author:  Clare Chase
Series:  Eve Mallow Mystery #6
Genre:   Cozy Mystery
Publisher:  Bookouture
Format:  Kindle ARC
No. of Pages:   265
Date of Publication:   August 4, 2021
My Rating:   4 Stars
DESCRIPTION:
When a TV drama crew descends on sleepy Saxford St Peter, Eve Mallow joins the excited throng of extras in a funeral scene. But then a real body is found… and Eve gets a starring role as sleuth!
Eve Mallow is looking forward to her fifteen minutes of fame when Saxford St Peter is chosen as the location for a new drama series. A devoted people-watcher, Eve is thrilled to learn that TV stars are just as glamorous – and tempestuous – as she’s always imagined.
But then someone delivers a bouquet of poisonous flowers to the director Rufus Beaumont, making Eve worry that some of the rivalries she’s noticed are deadly serious. And when Rufus’s body is found in the church where the funeral scene took place, it’s clear that someone’s out for the kill in real life.
Eve and dachshund Gus have been on the ground from the start, and now they’re on the case, interrogating the suspects one by one. Is it the devastating diva whose relationship with Rufus was far from professional? The cameraman who caught Rufus doing something he shouldn’t? Or the groupie groundskeeper who’s in the background of every shot? One thing’s for sure – Eve must catch the killer before she stars in their next murderous production…
A completely unputdownable page-turner, perfect for fans of Faith Martin, Agatha Christie and Betty Rowlands.
BUY LINK:
https://geni.us/B08ZYNQ1PQsocial
MY THOUGHTS:
Eve Mallow, part-time obituary writer and also an amateur sleuth, is excited when her village, Saxford St. Peter, is chosen as the location of a television drama. Eve was excited to hang around the set, even if it is only to bring trays of yummy cupcakes from Monty's teashop, one of her favorite haunts. Eve soon finds herself delivering more than cupcakes. In fact, when the director, Rufus Beaumont, is discovered murdered, Eve happened to be there while picking up the teashop's trays. Eve had just spoken to Rufus, especially after someone delivered Wolfsbane flowers to him, and these flowers are deadly poisonous. The flowers were accompanied by a note, which Eve had a chance to glance at while talking to Rufus.
Is it any coincidence that Rufus is soon found dead? Eve and beloved dachshund Gus are on scene, along with Robin Yardley behind the scenes. Robin is Eve's good friend and likely romantic prospect, and they are going to get to the bottom of Rufus's murder. However, Robin has a situation going on that prevents him and Eve being seen together publicly, but Eve keeps him informed of the people she speaks to. Also, Robin has a history as a former police detective, so he also has inside informaton. Will what Eve learns and what Robin shares with her be enough for her to solve the murder?
As always, Eve knocks heads with Detective Inspector Palmer, who is getting pretty tired of the coincidences that keep Eve involved in solving murders. Nonetheless, with Eve preparing to write Rufus's obituary, she is free to talk to everyone who has been at the set while the rehearsals for the television set had been underway.
It turns out that Rufus had an agenda with at least one of his cast members, so that raises concerns, and there are other things that begin to come to light that prove that more than one person had major issues with Rufus. Will Eve be able to suss out the facts and find the killer before anyone else - including her - loses their life?
Mystery at the Church is a delightful cozy mystery story and a great additon to an enjoyable series. I love Eve, her friendships, her role as a parent to adult twin children, and her growing relationship with Robin. I also love her powers of deduction, even if she has a penchant for getting into trouble. I am very much looking for the next installment in this engaging series.
Many thanks to Bookouture and to NetGalley for this ARC for review. This is my honest opinion.
ABOUT THE AUTHOR:

Clare Chase writes women sleuth mysteries. After graduating from London University with a degree in English Literature, Clare moved to Cambridge and has lived there ever since. She's fascinated by the city's contrasts and contradictions, which feed into her writing. She's worked in diverse settings - from the 800-year-old University to one of the local prisons - and lived everywhere from the house of a Lord to a slug-infested flat. The terrace she now occupies, with her husband and teenage children, presents a good happy medium.

As well as writing, Clare loves family time, art and architecture, cooking, and of course, reading other people's books.

You can find Clare's website and blog at www.clarechase.com