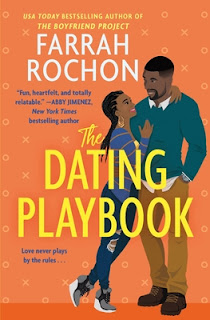 Title:   The Dating Playbook
Author:  Farrah Rochon
Series:  The Boyfriend Project #2
Publisher:  Forever
Genre:   Romance
Format:  Kindle ARC
No. of Pages:   384
Date of Publication:   August 17, 2021
My Rating:   4 Stars
DESCRIPTION:
When a personal trainer agrees to fake date her client, all rules are out the window in this "fun, heartfelt, and totally relatable" romantic comedy (Abby Jimenez, NYT bestselling author of Life's Too Short).
When it comes to personal training, Taylor Powell kicks serious butt. Unfortunately, her bills are piling up, rent is due, and the money situation is dire. Taylor needs more than the support of her new best friends, Samiah and London. She needs a miracle.
And Jamar Dixon might just be it. The oh-so-fine former footballer wants back into the NFL, and he wants Taylor to train him. There's just one catch—no one can know what they're doing. But when they're accidentally outed as a couple, Taylor's game plan is turned completely upside down. Is Jamar just playing to win . . . or is he playing for keeps?
PopSugar: Best Summer Reads of 2021
Link to purchase the book
MY THOUGHTS:
Taylor Powell has dreams of being successful when it comes getting her fitness consulting business on the map. How can she work on getting her name out there, especially since she had a previous bad experience that slowed her down? Meanwhile, she is running short on funds and tall on bills and other expenses. Her two friends, Samiah and London are in her corner, but sadly that isn't enough.
When she is approached to Jamar Dixon to be his personal trainer Taylor definitely sees dollar signs. He is a professional football player working to get back into the NFL, but needs help as he had a bad injury which required surgery. He needs to get into top shape. Jamar is practically a household name, so having him as a client would definitely get Taylor's name and business known. However, there is one issue and that is a major issue. Jamar wants to keep his training with Taylor on the down-low.
Since Jamar is adament about keeping this private, how better for the two to spend long hours together than acting as if they are dating? Okay, Taylor goes for it. There is a problem that makes itself known almost before the two even gets started. They are attracted to one another, something Taylor refuses to act on. In fact, both Taylor and Jamar walk into this with baggage. Will they be able to climb over their past hurts and turn their fake dating into something real? Something permanent?
I really loved this second book in the Boyfriend Project series. Both Taylor and Jamar were solid characters. Factor in the continuity with Samaih and London's characters, and this proved to be a relatable read, enjoyable from start to finish.
Many thanks to Forever and to NetGalley for this ARC for review. This is my honest opinion.
ABOUT THE AUTHOR:

A native of south Louisiana, USA Today Bestselling author Farrah Rochon officially began her writing career while waiting in between classes in the student lounge at Xavier University of Louisiana. After earning her Bachelor of Science degree from Xavier and a Masters of Arts from Southeastern Louisiana University, Farrah decided to pursue her lifelong dream of becoming a published novelist. She was named Shades of Romance Magazine's Best New Author of 2007. Her debut novel, Deliver Me, the first in her Holmes Brothers series, garnered rave reviews, earning Farrah several SORMAG Readers' Choice Awards.
Farrah is a two-time finalist for Romance Writers of America's RITA Award and has been a Romantic Times Book Reviews Reviewer's Choice Award nominee. In 2015, Farrah won the Emma Award for Author of the Year.
When she is not writing in her favorite coffee shop, Farrah spends most of her time reading, traveling the world, hanging around on Twitter, visiting Disney World, and trying to attend as many Broadway shows as her budget will allow. An admitted sports fanatic, Farrah feeds her addiction to football by watching New Orleans Saints games on Sunday afternoons.
Farrah is represented by Evan Marshall of the Evan Marshall Literary Agency.
web | twitter