Review - Someone to Remember 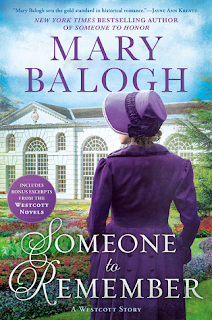 
It's never too late to fall in love in this enchanting new novella in the Westcott series from New York Times bestselling author Mary Balogh.

Matilda Westcott has spent her life tending to the needs of her mother, the Dowager Countess of Riverdale, never questioning the life of solitude she has spun for herself. To Matilda, who considers herself the aging spinster daughter, marriage is laughable--love is a game for the young, after all. But her modest, quiet life of order unravels when a dashing gentleman from her past reappears, threatening to charm his way into her heart yet again.

Charles Sawyer, Viscount Dirkson, does not expect to see Matilda Westcott thirty-six years after their failed romance. Moreover, he does not expect decades-old feelings to emerge at the very sight of her. When encountering Matilda at a dinner hosted by the Earl of Riverdale, he finds himself as fascinated by her as he was the first day they met, and wonders if, after all these years, they have a chance at happiness together. Charles is determined to crack the hard exterior Matilda has built for over three decades or risk losing her once again...

Matilda Westcott has accepted her fate as a spinster. Caring for her mother's every need has proved to be enough for her. She has far passed the marriageable age and has accepted her fate. But when she sees Charles Sawyer, Viscount Dirkson, a man from her past, never could Matilda imagine that she would find love at this season in life. It has been decades since they have seen one another and all Matilda can remember from their last exchange is heartbreak.

Charles is been married and is now widowed and is even a grandfather. Shocked, and pleasantly surprised to see Matilda again begins to give rise to strong feelings that he thought forever buried. Could this be their time for love?

I loved this entry in the Westcott series. It is always very sweet when older ones find love, especially when they get a second chance. It was a bit sad to see why the pair never moved on decades before, especially when they had everything going for them. It comes to no surprise that Matilda resists his efforts, but Charles sees something there.

I have read and enjoyed all of the previous books in the series. The series began after the Earl of Rivendale's death and how the fact that he had a bigamous marriage. This created a lot of change and discord with his legal family and the family the law deemed invalid. Each story had merit and it has been my pleasure to see each couple find love while at the same time the two families drawing closer.

While considered a novella, this story felt complete to me. Second chance romances are one of my favorite tropes, especially when a deep and abiding love is slowly brought back to life. It was a tender story, especially with Matilda feeling unworthy of love. One character who truly made me smile in this story is her mother. Charles was a delight as well, feeling his life was complete until he saw Matilda again.

The previous titles and their review links are listed here:

My sister, Moira, two years older than I, was my constant playmate and soul-mate. We both have a hard time convincing people who did not know us then that we were almost inseparable yet never quarrelled. Our few dolls became our family. They had names, personalities, histories. We used to lie awake in bed at night–until our mother would call up, promising dire consequences if we did not stop talking–inventing stories about our dolls’ antics. On summer days Mam would construct a tent out of blankets, string and clothes pegs attached to the clothesline and the garden fence, and we would play “house” all day. The neighbours must have cringed when we took our dolls for walks in the strollers Dad made for us, complete with solid–and excruciatingly noisy–wooden wheels.
Moira and I both used to fill notebooks with stories. We read voraciously–especially every book of Enid Blyton’s we could get our hands on when we were younger, the classics when we were a little older. We both used to say that we wanted to be authors when we grew up, though the word we used then was authoress. We both fulfilled our dream, though we both financed it with careers as high school English teachers.