BLOG TOUR - Daughter of the Shipwreck 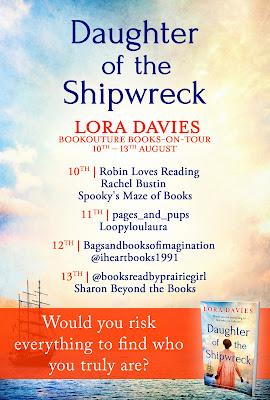 DESCRIPTION:
He kicked and struggled as his sister was carried out through the shallow water to one of the boats. The distance between them seemed to stretch out and out. There was nothing he could do. He cried out to her, his voice hoarse with tears, ‘I will find you! I promise!’

London, 1820: Nineteen-year-old Mercy, the orphaned daughter of an African prince, has come to live with the well-to-do Dr Stephens and his wife, Catherine, a passionate campaigner for the abolition of slavery.

Mercy throws herself into Catherine’s work, eager to help until – at an exhibition that has all of London talking – one particular painting makes a disturbing impression on her: conjuring vivid images of creaking wood and the screams of drowning people. Its effect on Dr Stephens is even stronger – a connection that seems almost personal.

Meanwhile, Mat, a young black sailor, scours the city in search of the men who kidnapped his sister many years before. When his path crosses with Mercy’s and he realises the girl he has been mourning is alive, it sets events in motion that will destroy everything Mercy thought was true about her old life – and her new one.

But as the names on Mat’s list are found dead, one after the other, the newly reunited siblings face a new danger. Someone is silencing all witnesses to the horrors of their past – and they could be next. But Mercy has had enough of secrets. She will have justice – no matter what the cost.

An utterly gripping and powerful novel about family, secrets, identity, and risking everything to be true to yourself. If you liked The Foundling, The Miniaturist or Amy Snow, you will love Daughter of the Shipwreck.
BUY LINKS:
Amazon: https://geni.us/B096S8XJ7Qsocial
Apple: http://ow.ly/wpPr50F6i2c
Kobo: http://ow.ly/ujdZ50F6i10
Google: http://ow.ly/ITNi50F6i3n 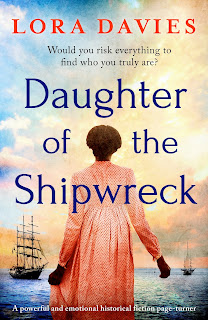 Title:   Daughter of the Shipwreck
Author:  Lora Davies
Publisher:  Bookouture
Genre:   Historical Fiction
Format:  Kindle ARC
No. of Pages:   320
Date of Publication:   August 10, 2021
My Rating:   5 Stars
Mercy is nineteen years of age and is living in the household of Dr. Stephens and his wife Catherine. Mercy is the orphaned daughter of an African prince and Catherine is a fervent advocate for the abolition of slavery. Mercy is educated and has quite a few freedoms. However, there are certain limitations in her life, as well as rather poor treatment at times, and these are things that confuse her.
Mercy is more than eager to assist Catherine, but when she is paraded about in a degrading manner, she strives to pull back. Meanwhile, on a visit to a museum on occasion, she sees a painting that brings disturbing dreams and memories to mind. One day she goes someplace with Catherine's maid Bridget and that is when she meets a scruffy stranger - and this stranger shockingly tells her that she is his long-lost sister.
There are other facets to this story. One thing is that Mercy seems quite connected to Dr. Stephens and this takes time to work out. Also, she had a rift with Bridget and it is intriguing as to what draws the two togther. Furthermore, Mat's story begins to be told. Who is Mat? He is Matondo, or Matthew, and he has a significant role in this story. He is the stranger that introduced himself to Mercy. Where has Mat been and how is it that he is just now seeing Mercy?
This story shifts back to the time when the pair were young children, ripped from their lives in Africa and then each other. Mat vowed to find Mercy one day and that he did. This does not mean happiness for them, however. In fact, the challenges grow and that is what make this such a riveting story. Mat was filled with more than the desire to find Mercy. He is filled with revenge for the man that pulled them apart.
I thought this would be a slave story. In fact, I thought it would be written by a BIPOC author. It was neither. Instead, it is an incredible story of identity, family and bravery. It is quite a sensitive story of two people who needed to find one another again, but at a time that was full of prejudice, judgment and danger. Kudos to Lora Davies for penning such an impressive story, one that garnered deep emotion and thought.
Many thanks to Bookouture and to NetGalley for this ARC for review. This is my honest opinion.
ABOUT THE AUTHOR:

Lora studied English at Hull University before training at East 15 Acting School. She went on to work as an actor, director and workshop leader throughout the UK, as well as in Italy and Hong Kong, for companies including English Touring Theatre, Chichester Festival Theatre and Theatr Clwyd. In 2018, Lora impulsively signed up for a writing course at her local bookshop and this led to a Masters in Creative Writing at Royal Holloway, University of London. Here she completed the first draft of her debut novel, graduating with Distinction in 2019.