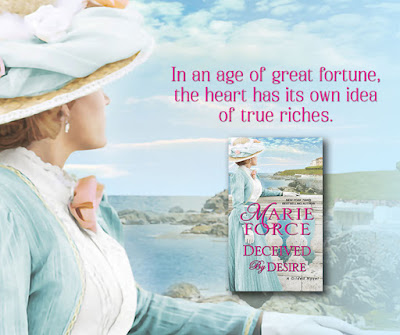 Today is my stop on the Blog Tour for Deceived by Desire by Marie Force.

Evan Griffith has had a hell of a day...
And that was before he met the stunning, sexy woman having a meltdown.

Evan Griffith has had many careers in his life. But who knew working for his family's moving company would hold just as much action as his stint in the Marine Corps? On an unforgettable job, Evan finds himself taken by a teenage conman and confronted by a woman wielding a knife—and promptly falls head over heels for her.

Kenzie Sykes is doing her best to raise her little brother and keep him out of jail—all while dealing with her own broken heart that just hasn't healed. She doesn't have time for romance. He's not asking... Until he is, and she finds herself saying yes. 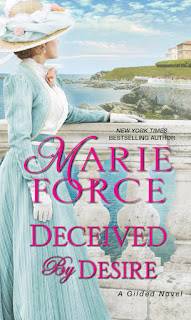 Aubrey Nelson is a wealthy man - new money, as it were - and has very good friends that include the Duke and Duchess of Westbrook. Aubrey has invited them, as well as other dear friends to summer at his mother's estate.

As Aubrey's father is ill, he arrives ahead of his parents. This turns out to be a very good thing. His mother is a tyrant to the fullest extent and had upset her household staff when she was last there that they left the house to ruin. When Aubrey steps into the home, he only sees one person, the housekeeper. He is inexplicably drawn to her. She is a young Irish woman named Maeve Brown.

Before she realizes that Aubrey is related to the owner, they quickly share confidences about the state of the house. They develop an immediate bond. However, it is shattered almost immediately once she discovers who he is. Aubrey wants to forget rules and convention and is determined to pursue Maeve. Of course, she wants nothing more to do with him.

However, Aubrey learns that Maeve is in danger, and offers her his protection - by marriage. He can protect her with his name and his wealth. Maeve is more than reluctant to accept his offer, but she cannot deny that he is indeed everything her heart desires.

This was quite an enjoyable book. It had more than enough to offer. The romance felt real, the dynamic between Aubrey and his mother, and also the rules of society was handled well, and the mystery surrounding the reason for Maeve being in danger was a good part of the story.

Although Deceived by Desire is the second book in a series, it will do quite well as a standalone. Quite naturally, readers who read the first book, Duchess by Deception, will be familiar with some of the characters.

Many thanks to Zebra and to Inkslinger PR for this ARC to review in exchange for my honest opinion.

Caffeine addict, boy referee, and romance aficionado, New York Times and USA Today bestselling author Marie Harte has over 100 books published with more constantly on the way. She’s a confessed bibliophile and devotee of action movies. Whether hiking in Central Oregon, biking around town, or hanging at the local tea shop, she’s constantly plotting to give everyone a happily ever after. Visit http://marieharte.com and fall in love.