Review - The Lies that Bind 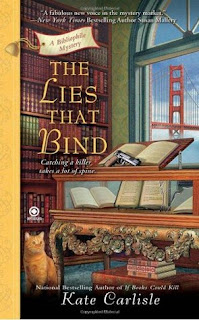 Book restoration expert Brooklyn Wainwright returns home to San Francisco to teach a bookbinding class. Unfortunately, the program director Layla Fontaine is a horrendous host who pitches fits and lords over her subordinates. But when Layla is found shot dead, Brooklyn is bound and determined to investigate—even as the killer tries to close the book on her for good.

Brooklyn Wainwright, an expert when it comes to restoring books, has recently returned home to San Francisco after attending a conference in Edinburgh. Her next job will be to teach a bookbinding class. She has several scheduled students for her course, but when the program's director, Layla Fontaine, adds another woman, Alice, for Brooklyn to teach, she is a bit thrown off.

This turns out to be the least of her problems, actually, because Layla is found dead. Brooklyn has to stop and think. This is hardly the first time she has stumbled across a dead body. So, not only does Brooklyn seem bound and determined to figure out what happened to Layla, she runs into security expert Derek Stone. The two had an almost relationship, but it seemed like nothing would ever come of it.

The more Brooklyn becomes involved, the more danger she places herself in. Meanwhile, she successfully works with her students and proves to be an intelligent teacher.

One reason that I enjoy reading various series so much is because of the continuity. In this case, not only is Derek back, but Robin, Brooklyn's best friend is back. Unfortunately for Brooklyn, her nemesis is back as well, and will also be teaching a class. Her neighbors, chainsaw sculptors, are back too. Of course, Brooklyn's parents make a cameo appearance.

I loved the mix of intrigue, friendship and family in this book. I also enjoyed watching the romance bloom between Brooklyn and Derek. Actually, I discovered this series with the 13th book, The Book Supremacy, so I already know how they end up, but it is a delight watching things form.

As of writing this review, I have also read the fourth book in the series, Murder Under Cover and look forward to continuing with Pages of Sin and One Book in the Grave.