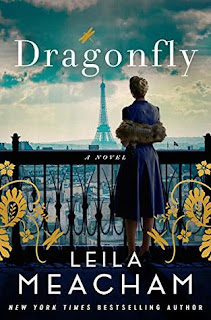 At the height of WWII, five idealistic young Americans receive a mysterious letter from the OSS, asking them if they are willing to fight for their country. The men and women from very different backgrounds--a Texan athlete with German roots, an upper-crust son of a French mother and a wealthy businessman, a dirt-poor Midwestern fly fisherman, an orphaned fashion designer, and a ravishingly beautiful female fencer from Princeton -- all answer the call of duty, but each for a secret reason of his or her own. They bond immediately, in a group code-named DRAGONFLY.

Soon after their training, they are dropped behind enemy lines and take up their false identities, isolated from one another except for a secret drop-box, but in close contact with the powerful Nazi elite who have Paris under siege.

Thus begins a dramatic and riveting cat-and-mouse game, as the young Americans seek to stay under the radar until a fatal misstep leads to the capture and the firing-squad execution of one of their team. But...is everything as it seems, or is this one more elaborate act of spycraft?
Link to purchase the book

World War II is in full throttle and five young Americans are chosen to work with the OSS. They will be fighting for their country and serving in France. Not only do they not know one another at the outset, their families cannot not know that they will soon become spies. They are code-named Dragonfly, and are each given false identities.

They take on their assignments, albeit separately. However, they have an agreed upon rendezvous location when information must be shared. They are always aware of the extreme danger facing them. By this time, Hitler's armies have invaded Paris and the city has been turned upside down.

In immediate succession, a series of tragic and dramatic events surround the young people, as well as countless innocent victims. Things take a horrid turn, however, when one of the team is captured and faces the firing squad. I was reading the massive large-print book, and I literally dropped it when reading.

I am almost at a loss as to what to state further. Hitler's crimes are known far and wide. Reading about myriads of people losing their lives was difficult, as can be imagined. Reading about how countries, like America, employed people strictly to save lives was actually quite rewarding to read.

I will say that this book kept me rapidly turning pages, and I read it in one day, in just two sittings. I gasped, cried and then celebrated when reaching the conclusion. One of the drawing factors to this book was each individual story. I felt drawn to each young person, whether it was their backstory or where they ended up once the war was over.

Dragonfly is historical fiction at its very best. History has proved quite true and realistic when it came to reading this book. I can only imagine the hours and hours of intense research Leila Meacham spent while composing this book.

Leila Meacham is a writer and former teacher who lives in San Antonio, Texas. She is the author of the bestselling novels Roses, Somerset and Tumbleweeds.