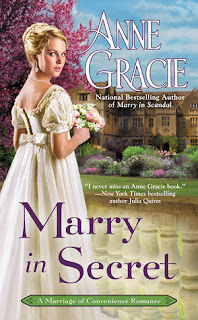 A rugged and ruined naval officer comes to claim his bride in an unforgettable tale of love, revenge and redemption from the national bestselling author of Marry in Scandal.

Lady Rose Rutherford—rebel, heiress, and exasperated target of the town's hungry bachelors—has a plan to gain the freedom she so desperately desires: she will enter into a marriage of convenience with the biggest prize on the London marriage mart.

There's just one problem: the fierce-looking man who crashes her wedding to the Duke of Everingham — Thomas Beresford, the young naval officer she fell in love with and secretly married when she was still a schoolgirl. Thought to have died four years ago he's returned, a cold, hard stranger with one driving purpose—revenge.

Embittered by betrayal and hungry for vengeance, Thomas will stop at nothing to reclaim his rightful place, even if that means using Rose—and her fortune—to do it. But Rose never did follow the rules, and as she takes matters into her own unpredictable hands, Thomas finds himself in an unexpected and infuriating predicament: he's falling in love with his wife....
Link to purchase the book

Lady Rose Rutherford is a rebel. She has seen her brother and sister find love, and now it seems that she is next on the marriage market. Having turned down an inordinate number of proposals, Rose decides to forge her own path by entering a marriage of convenience. She has given up of finding love, but she does want children of her own, so she agrees to marry the Duke of Everingham.

However, right in the middle of the ceremony, everyone is shocked to hear: STOP THE WEDDING. Who is the man suddenly standing before her? Unkempt and unclean, yet he bears an unsettling resemblance. The man proves to be Thomas Beresford, a naval officer who Rose secretly married four years previously. How can this be? He was said to have died.

Not only is Rose forced to end her almost-wedding, Thomas immediately has plans of his own. These plans include a path towards vengeance. He lost everything when he almost died and has suffered a terrible fate. Now he is back and will stop at nothing, including using Rose and he fortune to get back everything he lost.

Rose is baffled. She never stopped loving Thomas, but she was sure he was lost to her forever. Who is this man before her now? He is not the gentle and passionate man she fell in love with. Instead, he is cold, hard and angry.

Rose and Thomas are about to have a second chance in life. Things will not come easy, especially when considering the horrid things that Thomas experienced. I was so very sad for Thomas and felt for him. It was heartwarming to see Rose's compassion and love shine through, while watching Thomas begin to heal.

Marriage in Secret is the third book in the Marriage of Convenience series. We have had Emm and Lily's stories, and they were a delight. Rose's story is my favorite. In part, because she is so young, just twenty years old, but her capacity for love is incredibly overwhelming. As this is her story, it could serve as a standalone. But the family ties are powerful, so reading this series in order just might be very enjoyable for lovers of this genre. I do look forward to Georgiana's story next.

On the left is me in Greece with my good friend, Fay, in our village outfits. The film went a funny colour, but you get the idea. I’m the one in the pink apron. On the right, is me posing shamelessly on a glacier in New Zealand.

No matter where I lived, I read. I devoured whatever I could get my hands on — old Enid Blyton and Mary Grant Bruce books, old schoolboys annuals. I learned history by reading Rosemary Sutcliffe, Henry Treece and Georgette Heyer. I loved animal books — Elyne Mitchell’s Silver Brumby books and Mary Patchett and Finn the Wolf Hound. And then I read Jane Austen and Dickens and Mary Stewart and Richard Llewellyn and Virginia Woolf and EF Benson and Dick Francis and David Malouf and Patrick White and Doris Lessing and PD James and…the list is never ending.