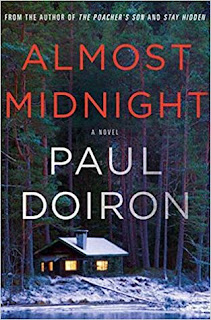 Warden Investigator Mike Bowditch already has a troubling mystery on his hands: finding the archer who mortally wounded Maine’s only wild wolf. Then he learns his best friend, Billy Cronk, has been released from prison after heroically defending a female guard from a stabbing. Mike comes to believe the assault was orchestrated by a wider criminal conspiracy. When the conspirators pursue Billy's wife and children to a “safe" cabin in the woods, Mike rushes to their defense only to find himself outnumbered, outgunned―and maybe out of options.
Link to purchase the book

Mike Bowditch is a Warden Investigator who has two pressing mysteries, and they are both priorities. On the one hand he must identify the archer who struck down Maine's only known male wolf, and find a female wolf he is certain is out there.

At the same time, his best friend, Billy Cronk, currently imprisoned due to testimony Mike had no choice but to give, begs his help and protection from a female guard. Ironically, the guard is seriously wounded, and Billy saves her life. This results in Billy being pardoned. However, there is a level of corruption so deep that the lives of Billy's wife and children are in serious danger.

Can Mike find whoever it was that mortally wounded the wolf?

One thing Mike quickly determined is that there is danger on many levels. This is in large part due to the vast area and peoples there in Maine. Furthermore, there is a high level of corruption and Mike almost single-handedly must sort it all out. Fortunately, Mike has uncanny skills and this proves to be life-saving.

Almost Midnight is the 10th book in the Mike Bowditch series. Unfortunately, I have not had the opportunity to read the previous titles. I am really happy that I got to read this book as I managed to find an author that I enjoy. So, I will add this to my series spreadsheet and one day read the prior titles so that I can follow this in the future.

Many thanks to Minotaur Books and to NetGalley for this ARC to review in exchange for my honest opinion.

His second book, Trespasser, won the Maine Literary Award, was an American Booksellers Association Indie Bestseller, and has been called a "masterpiece of high-octane narrative" by Booklist. The third novel, Bad Little Falls, was a Bookscan Bestseller and a nominee for the RT Reviewers Choice Award and the Maine Literary Award. Massacre Pond, the fourth in the series, was an Indie Next pick and an Indie Favorite, as well as Bookscan Bestseller, and Maine Literary Award finalist. The Bone Orchard received a Best of Maine award from Down East. The Precipice was a LibraryReads selection and a RT Top Pick. The seventh Mike Bowditch novel, Widowmaker, was also a LibraryReads selection and a #1 Maine Sunday Telegram bestseller. Published in 2017, Knife Creek was Paul's bestselling novel to date.  The ninth book in the series, Stay Hidden, was a USA Today Bestseller and the best-selling novel in the series to date.

In 2019 Paul received his second Edgar Award nomination for “Rabid,” an eShort that reveals some of the secret history of his breakout character Charley Stevens (also available as a digital audio).

Paul is Editor Emeritus of Down East: The Magazine of Maine, having served as Editor in Chief from 2005 to 2013, before stepping down to write full time. A native of Maine, he attended Yale University, where he graduated with a degree in English, and he holds an MFA in creative writing from Emerson College. He is a former member of the Maine Arts Commission and current chair of the Maine Humanities Council. He is also a Registered Maine Guide specializing in fly fishing and lives on a trout stream in coastal Maine with his wife Kristen Lindquist.

His novels have been translated into 11 languages: German, Japanese, Spanish, Portuguese, Russian, Polish, Romanian, Slovenian, Hungarian, Czech, and Finnish. The UK editions of his books are published by Constable & Robinson, a division of Little Brown.