Review - How to Cross a Marquess 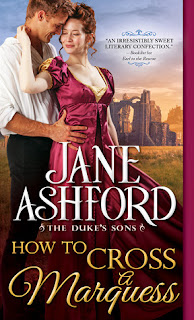 DESCRIPTION:
The Marquess of Chatton and his neighbor Fenella Fairclough have known each other all their lives. They refused to marry each other years ago when their parents demanded it, and they won't concede now―even if circumstances have brought these former enemies much closer than they ever could have anticipated...

Years previously, Roger, the Marquess of Chatton, was nearly forced to marry Fenella Fairclough. Although close friends for years, they had no desire to marry and Fenella fled. Roger did indeed marry, but that was definitely not a love match, and due to odd circumstances, his wife died.

In the prologue of this story the Arthur Shelton, the Earl of Macklin has gathered several men who have suffered loss together. He has a very odd role of a matchmaker, although he doesn't want to be viewed as such. He would rather be viewed as someone who can change things for people when he sees a need in them.

Roger wasn't the best person for most of his life, spoiled as he was. However, with his experiences, he has changed and become a better man. Fenella was my favorite in this story, however. She experienced far more than her fair share of abuse and ridicule by her father, in fact, her entire family. However, she showed remarkable strength and fortitude, proving that she was not only a capable person, but someone deserving of love and happiness.

When Roger and Fenella get a second chance, the story becomes truly heartwarming. Roger tried so very hard to honor the memory of his wife, as unhappy as he was. However, he must face the fact that he is indeed quite drawn to Fenella, and must cope with feelings of guilt and self-recrimination.

While these two are carving their path toward a warm and happy future, the story includes other memorable characters. There is, as mentioned, the Earl of Macklin, but also Roger's mother, and a couple of teen boys who, in their own ways, affect change with regard to what might happen with Roger and Fenella.

The story takes a bit of a turn when it comes to an element of mystery when Fenella's life might be in jeopardy. With the romance, characters and scenarios, this proved to be an excellent book. I really did enjoy How to Cross a Marquess, as I have the previous books in The Way to a Lord's Heart series.