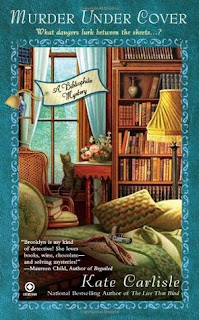 When she receives an exquisite copy of the Kama Sutra from her best friend Robin to appraise and restore, Brooklyn Wainwright anticipates both recreating a beautiful book and spicing up her love life.

But then Robin's apartment is ransacked, and the great guy she recently met is murdered in her bed. Now Robin is the #1 suspect. Obviously, exploring the Kama Sutra's bliss will have to wait until after Brooklyn finds the killer...

Brooklyn Wainwright is a book restoration expert in a league of her own. She can choose whatever project she wants to work on. When best friend Robin presents her with a damaged, but invaluable copy of the Kama Sutra, Brooklyn is more than intrigued. This book could serve a dual purpose for her. Of course, she has the privilege of restoring it, but she knows she could have fun with it, especially now that she and Derek Stone have gotten rather serious. Derek is a British security expert who has opened up a business in San Francisco simply to be a part of her life.

Robin then shows up at their door - bloody. She woke up next to a man she was enamored with, only to discover that he was shot twice while she was sleeping right next to him. Robin is the primary subject in the immediate investigation. Robin feels safe knowing she will have Derek's help. Furthermore, Brooklyn has managed to help find many a killer in the months previously, and she will go to whatever means necessary to prove Robin's innocence.

Murder Under Cover is the fourth book in the Bibliophile series and it has proved to be my favorite so far. There were a lot of delightful layers in this book. For starters, how could a man die right next to Robin? Who was this man? Well, things looked one way in the beginning, but turned out to be something else entirely in the end.

Kudos to Kate Carlisle for taking readers down a twisty path. I love trying to guess who the killer is when reading mysteries, but especially cozy mysteries. In this case, I was rather shocked. While working that out, I was pleased to see how Brooklyn and Derek have cemented their relationship. All the while, the bond of friendship between Brooklyn and Robin gave me a warm, fuzzy feeling.

For a delightful book, as well as an enticing series, I highly recommend this one. The next book is a novella, Pages of Sin, to be followed by One Book in the Grave.