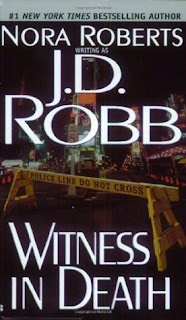 From New York Times bestselling author J. D. Robb comes a new novel in the futuristic series that has captivated readers everywhere. When a celebrity is killed right before her eyes, New York detective Eve Dallas takes a new place in crime - as both officer and witness to murder...

Opening night at New York's New Globe Theater turns from stage scene to crime scene when the leading man is stabbed to death center stage. Now Eve Dallas has a high-profile, celebrity homicide on her hands. Not only is she lead detective, she's also a witness - and when the [press discovers that her husband owns the theater, there's more media spotlight than either can handle. The only way out is to move fast. Question everyone and everything...and in the meantime, try to tell the difference between the truth - and really good acting...

Lieutenant Eve Dallas and her gallant billionaire husband Roarke attend opening night a the New York New Globe Theater. Roarke owns the theater and is more than proud to be spending such an exciting evening with Eve. Shockingly, however, during a pivotal scene, it tragically turns out a prop knife was actually a real one and the male lead is killed in right in front of the entire cast and audience.

Eve immediately becomes the lead detective and begins her inquiries right away. Quite naturally, the actress that used the knife is the very first suspect. With Roarke's wealth and notoriety, especially as the theater owner, attention falls onto him.

Aside from the lead actress, there are a host of people to question. As Eve delves deeper into the apparent murder, things are revealed. Perhaps slowly at first, but, as always, everything begins to fall into place.

As the series is developed, readers gain more insight into Eve's and Roarke's relationship. Also, Eve's past comes into play, and what this does is to further cement the love she and Roarke share. I love how J.D. Robb gives readers such a fine balance of intrigue and romance.

I look forward to the next book in the series, Judgment in Death.